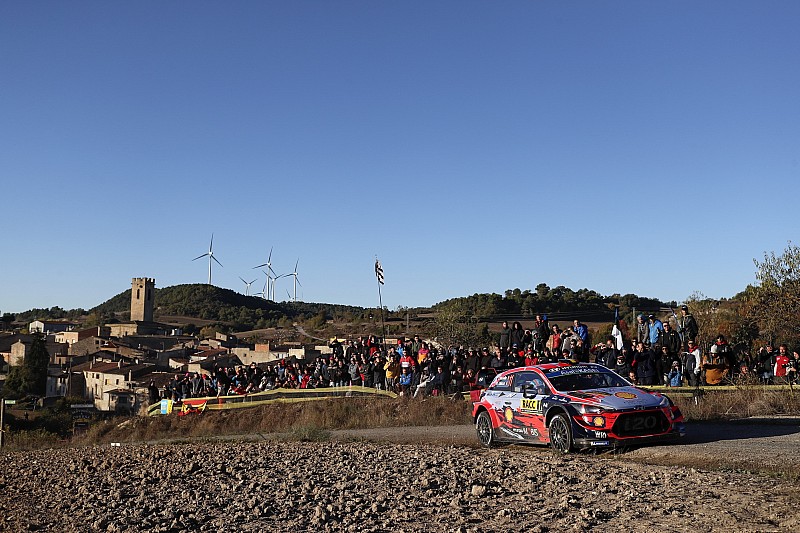 Hyundai’s Thierry Neuville has resumed the lead of the Rally of Spain from WRC teammate Sebastien Loeb as Toyota’s Kris Meeke crashed out of a podium place.

After Friday’s six gravel stages, the action switched to tarmac, and Meeke immediately deprived Dani Sordo of third place on the opening Savalla test with the second-quickest time.

But it would all unravel quickly on Querol when Meeke smashed his Toyota Yaris WRC against the Armco barrier and ripped the rear-right wheel off.

Although the crash promoted teammate Ott Tanak to fourth and thus boosted his chances of claiming a maiden WRC title this weekend, it comes as a blow to Toyota’s manufacturers' championship aspirations, with Hyundai drivers currently locking out the podium.

Loeb held a 1.7-second lead heading into Saturday, but had no answer to the pace of a charging Neuville. The championship hopeful recorded quickest times on Savalla and Querol and again outpaced Loeb on El Montmell to establish an 11.4s lead.

Sordo couldn’t quite match the pace of Neuville and Loeb and has drifted back from the lead two, but remains comfortable in third ahead of Tanak, who himself has failed to trouble the leaders despite a stage win on the morning’s final test.

Another Toyota driver, Jari-Matti Latvala, lies fifth after extending his advantage over Elfyn Evans in the best of the M-Sport Fords to 18.5s.

The Welshman's teammate Teemu Suninen has now closed to 12.2s behind Evans in seventh after a relatively anonymous morning.

Takamoto Katsuta had been lying ninth in a fourth Toyota Yaris WRC, but missed his start time on Savalla by half an hour with a gearbox-related issue. Although he made it into the stage he parked up a mere 10m in, and when he resumed he only had first gear.

Katsuta completed the loop 19 minutes adrift of the lead, which, coupled to Meeke’s exit, elevated Sebastien Ogier into eighth place following his hydraulic issues on Friday.

The defending world champion began the leg in 17th place but is four minutes behind the rally leader despite climbing back into the points.

Mads Ostberg and Eric Camilli complete the top 10 in their Citroen C3 R5s.

Esapekka Lappi’s Citroen C3 WRC ground to a halt on Friday’s final stage with an engine-related issue, and Lappi was unable to restart on Saturday.