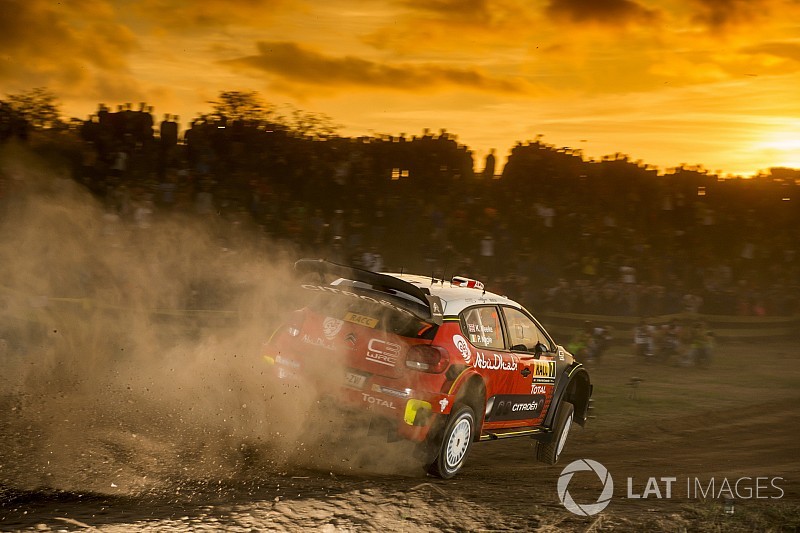 Kris Meeke rocketed to the top of the order on Rally Catalunya’s Saturday morning loop, as WRC title challenger Thierry Neuville crashed on the road section before stage nine.

Citroen driver Meeke started the day in third after Friday’s gravel stages, but a push on SS7 put him into a 9.1s lead, which he extended to 13.5s by the end of the loop.

The Belgian began the rally 17 points behind title rival Sebastien Ogier, but understeer on the first stage of the morning pushed him back.

Hydraulic issues after SS8 meant his i20 WRC wouldn’t start, and when it eventually did, he rushed towards the next stage. However, he then went off the road on the road section, meaning he arrived three minutes late to the stage.

That incurred a 30-second penalty which drops Neuville down to eighth in the order.

M-Sport’s Ott Tanak now holds second by 0.3s after stealing it from teammate Ogier on the final stage of the loop.

Hyundai driver Dani Sordo had been as high as second, but ended the loop fourth, 0.8s behind Ogier.

Andreas Mikkelsen began the day in the lead, but he fell quickly down the order as the event moved onto tarmac, on which all three Hyundais suffered understeer.

On his competitive Hyundai debut, the Norwegian driver lies fifth, six seconds behind Sordo and over 20 off the lead.

Undoubtedly the fastest man of the morning with two stage wins out of three was a resurgent Juho Hanninen, the Finn leading Toyota's charge and working his way up to sixth.

Hanninen overhauled Mads Ostberg, who had a small off on the first stage of the morning as he adapts to his first event on tarmac of the year his Ford Fiesta unaffected by the incident.

Behind Neuville, Esapekka Lappi and Stephane Lefebvre of Toyota and Citroen respectively round out the top 10, while Elfyn Evans is the final competitive 2017-spec WRC car in 11th.