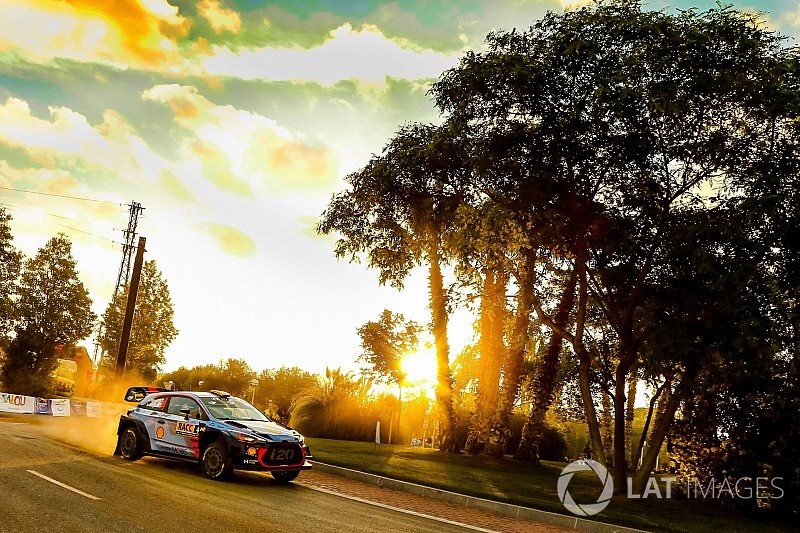 Andreas Mikkelsen enjoyed a dream first day in his new job as a Hyundai driver, leading Rally Catalunya at the end of the gravel stages on Friday night.

Mikkelsen lost the lead briefly after the opening test of the afternoon – when he slipped 0.3s behind Mads Ostberg – but he was straight back to the front after stage five and stayed there after the second run through the 24-mile Terra Alta test, despite a damper problem.

Heading for service in Salou, where the cars would go through a complete setup change ahead of a weekend on asphalt, WRC leader Sebastien Ogier was Mikkelsen’s nearest rival.

“It’s been a really good day for me,” said Mikkelsen. “To be honest, it’s been fantastic.

"OK, in the last stage we had a problem with a damper – it was crashing through from about halfway through the stage and that was quite distracting.

"But I feel really at home with this car already, I can tell I’m going to like this one!"

Mikkelsen will have to learn the i20 Coupe WRC all over again tomorrow morning, when he starts on asphalt.

“It’s true, that will be another new start. I have done some testing, but testing is testing and not the rally. Let’s see what happens.”

Fastest time in the last test was enough for Ogier to close the gap to the lead to just 1.4s.

Ogier’s day had been saved by the occasional asphalt sections mixed into the Spanish gravel as, running first on the road, he expected to be further down the order.

“I’m happy with this place,” he said. “We had to push really hard on the Tarmac, this was the only place we could make a difference.”

Had it not been for a spin on SS4, Kris Meeke’s Citroen C3 WRC might have been out at the front.

“That was so frustrating,” said the Briton. “I just caught the lip of the Tarmac and it spun us. I had to reverse, forward, reverse. It was really close to the end. But anyway, we’re here and it’s a good position to be in.”

Ogier’s teammate and winner last time out in Germany Ott Tanak was fourth, having lost the feeling he enjoyed with his Ford Fiesta in the morning.

Ostberg was a hugely annoyed fifth, having struggled through SS6 with the heater full on.

“It was like 100 degrees in here,” he said. “And I cannot concentrate when it’s like this. It’s always these stupid things.”

Toyota drivers Juho Hanninen and Esapekka Lapppi sandwiched Stephane Lefebvre’s ninth-placed Citroen, while the third Yaris of Jari-Matti Latvala retired with what is thought to be an engine fault after SS5.

Elfyn Evans is 1m22.4s off the lead after his DMACK tyres wilted in the heat.

Teemu Suninen leads WRC2 by 1m17s despite a power steering problem aboard the M-Sport Fiesta R5 on the final stage.