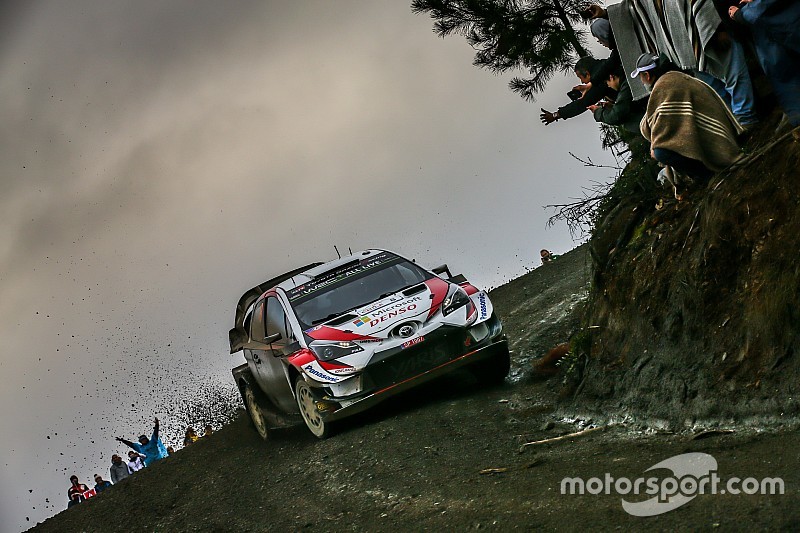 The trio are separated by 6.6 seconds overall after the first morning of the new rally, and moved well clear of the rest on the 30.72km El Puma SS2.

Those who ran after them complained about a particular shortage of grip on a hard, polished surface. It left Tanak in the overall lead, 2.9s clear of Citroen's Ogier, while Tanak’s Toyota teammate Kris Meeke was left 12.4s off in fourth place.

Points leader Neuville meanwhile got a notional second stage time – 6.6s slower than Tanak’s stage-topping mark – as the red-flag was given with only him out, a few kilometres in, as the FIA safety delegate had not cleared the stage.

His notional time, which he described as “very bad”, left him third overall in his Hyundai i20 Coupe, 7.3s off leader Tanak after two stages.

Neuville then bounced back in the Espigado 22.26km third stage, benefiting from fresher tyres after not doing stage two in anger. He topped the SS3 times, 0.7s faster than Tanak, to end the morning third overall, 6.6s off Tanak at the top and just 0.5s off second-placed Ogier.

Both Tanak and Ogier made a similar error at the same spot of the opening 17.11km El Pinar stage, when they overshot and stalled after a short bridge.

Ogier lost around 2s in his incident and Tanak around 5s in his. Tanak at the stage end also hinted at needing to “fix” things on his Yaris. He confirmed after the second stage that the problem had been sorted, but added throughout that he was unhappy with his driving.

Tanak’s Toyota stablemate Jari-Matti Latvala, with whom Meeke had topped stage one, ended the morning fourth overall 12.9s off the lead after an amazing SS3 time, just 0.2s off Neuville’s despite running seventh on the road.

Meeke is fifth overall, 27.8s off the top, followed by Elfyn Evans just 1.8s further back in his M-Sport Ford Fiesta.

Hyundai’s Sebastien Loeb is seventh overall after the opening loop, 38.1s off the lead, while his teammate Andreas Mikkelsen is eighth, 1m11.9s off the pace after losing time hitting a rock on the first stage.

M-Sport’s Teemu Suninen is a further 2.2s back in ninth, feeling unable to trust his notes.

Citroen’s Esapekka Lappi meanwhile lost around 20s on stage one after having to reverse due to running wide in a corner following a watersplash, though he didn’t hit anything.