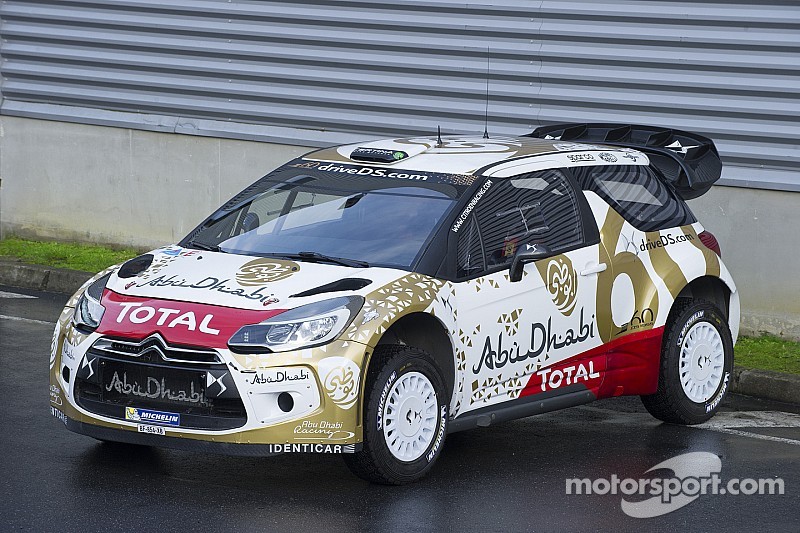 To kick off celebrations for the sixtieth anniversary of the DS, the DS 3 WRCs entered by the Citroën Total Abu Dhabi WRT will feature exclusive livery in this year’s WRC.

Unquestionable star of the 1955 Paris Motor Show, the Citroën DS is celebrating its sixtieth birthday this year. As a nod to this landmark anniversary, the Citroën Total Abu Dhabi WRT DS 3 WRCs are to feature exclusive decals starting at this month’s Rallye Automobile Monte-Carlo. Simplified to provide greater legibility, the white, red and gold livery includes an imposing “60” spread across the rear wings.

The start of the new World Rally Championship season also sees the arrival of two new partners. Official WRC timekeeper since 2013, Certina will feature on the bodywork of the cars and the overalls of the crews. Sheikh Khalid Al Qassimi, Kris Meeke and Mads Østberg will also wear watches made by the famous Swiss brand.

Already heavily involved in motorsport, the automotive equipment manufacturer Sparco becomes an official Citroën Racing supplier. This transversal partnership covers all of the series in which the Brand is competing, including WRC, WTCC and customer racing.

“We’re very pleased that prestigious partners like Certina and Sparco share our passion and have decided to pledge their support to us,” commented Yves Matton, Citroën Racing Team Principal. “We hope to defend their colours very successfully throughout the world, on some of the planet’s most beautiful and most difficult roads.”