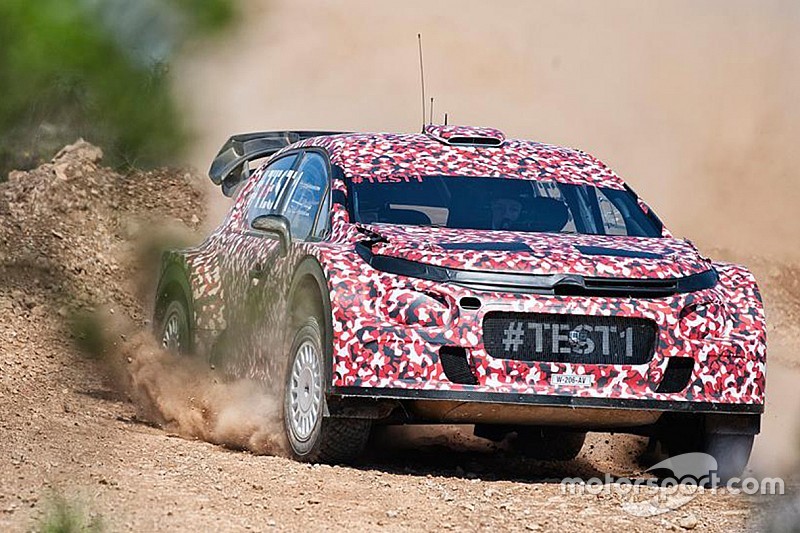 The team were treated to rain, hail, fog and even occasional sunshine as they worked on the new car.

Three weeks after the first outing, Citroën Racing continued development of its 2017 World Rally Car in the south of Portugal. Faced with a variety of weather conditions, Kris Meeke and Stéphane Lefebvre racked up the miles during four days of testing.

After holding the first test in the south of France, Citroën Racing headed for Portugal and the Algarve for the second session of development testing for its 2017 World Rally Car. The team were treated to rain, hail, fog and even occasional sunshine as they worked on the new car. Before contesting Rally de Portugal with the Abu Dhabi Total World Rally Team, Kris Meeke/Paul Nagle and Stéphane Lefebvre/Gabin Moreau were busy behind the wheel of the prototype produced by the Versailles Technical Centre.

It was a critical moment because some components took a long time to manufacture.

“We were actually quite pleased to have these variable conditions because they meant we could test different set-ups and assess how the bodywork stood up to being loaded with mud,” explained Laurent Fregosi, Citroën Racing’s Technical Director. “During the tests, we have several objectives. Obviously, we want to check the reliability of the various components. The mileage done by each part is noted down to make sure it tallies with the specifications. But our work is also focussed on looking for performance and driver comfort.”

After graduating in Engineering at INSA Lyon, Laurent Fregosi joined Citroën Racing in 1995, when the ZX Grand Raid dominated the Dakar Rally. He has therefore worked on every rally programme since the Xsara Kit-Car. Appointed Chief Engineer, Chassis, in 2005, Laurent took over from Xavier Mestelan-Pinon at the start of the year. Involved for over a year on the 2017 programme, the new Technical Director reflected on the origins of the car.

“Seeing our World Rally Car complete two long test sessions on demanding surfaces without encountering any major problems is very satisfying and just rewards for those who have been working on this project for over a year,” emphasized Laurent Fregosi. “As always, we began by drawing up a set of specifications, based on the FIA regulations and the Brand’s marketing goals. Once we had chosen the base model, we retrieved the CAD data in order to define the layout of the main components: engine, transmission, fuel tank, spare wheel, etc. The design of the roll cage stemmed from all these volumes as well as the regulatory position of the crew.”

Called on to produce the initial drawings, the design office then went to work on designing each part: “The approach is always the same: design hard-wearing, light components, whilst implicitly looking to adjust and lower the centre of gravity. The crews, as well as the engineers and technicians that will be running the car, were asked to give their opinion. We still need, for example, to improve the removal of parts that are likely to be replaced in service.”

“As ever, the work done factored in the experience acquired over the last twenty years or so at the highest level of world rallying. But we also added to our knowledge base by completing tests with a DS 3 WRC development mule,” revealed Laurent Fregosi. “Having reduced the pace of its development in 2014, we wanted to try out a few new solutions for the future. We used a Citroën C-Elysée WTCC engine, which meant the car immediately possessed the same power level as we’ll see next year. We also tested the latest suspension systems.”

Once approved by the Computation Design Office, the drawings were handed over to the various workshops (transmission, suspension-steering-brakes, electronics, plastic components, etc.) to manufacture the parts and then fit the sub-assemblies.

Packed into less than a month, the assembly of the first prototype involved the efforts of various teams: “It was a critical moment because some components took a long time to manufacture. In the workshops, the technicians adopted a just-in-time approach, so that we would be ready on schedule. Although we have already completed two test sessions, we’ve only just begun the journey.

Analysing the data and driver feedback helps us to develop the technical definition whilst selecting the most efficient solutions. As the same time, we are also preparing a second car, which will be shortly used for testing on tarmac. This iterative way of working – which affects all areas, from the chassis to the engine, including the transmission and the aerodynamics – will continue until we need to obtain homologation of the car for the 2017 Rallye Monte-Carlo. That point seems so far away, and yet it’ll be here before we know it!”

Hyundai Motorsport pushes for podium in Portugal with four-car entry