Citroen: With the finish line in sight… 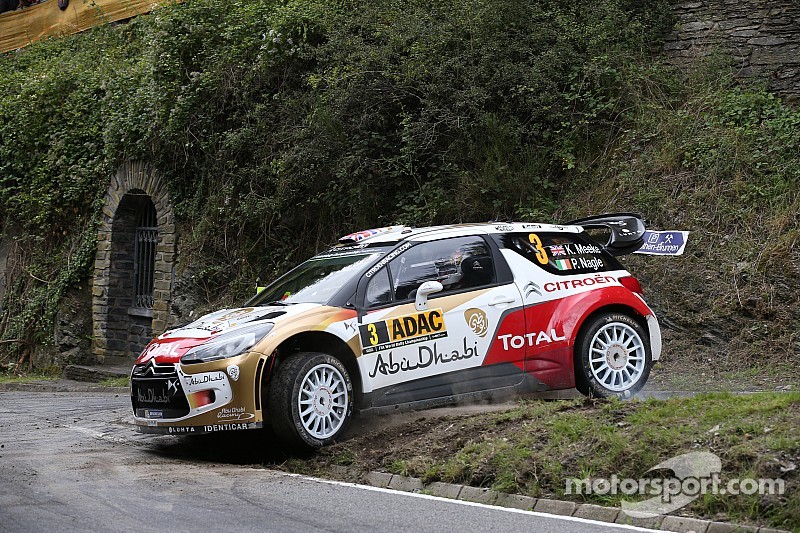 Leading with just three stages left to go, Kris Meeke and Paul Nagle added their names to the long list of casualties at this year’s Rallye Deutschland.

Second going into today’s final leg of Rallye Deutschland, Kris Meeke and Paul Nagle moved into first place overall at the end of Dhrontal (SS15). However, in the opening stages of Grafschaft (SS16), the number 3 DS3 WRC went off the road, leading to the retirement of the Briton and the Irishman.

Mads Østberg and Jonas Andersson set off for Sunday’s two loops aiming to snatch sixth position. They ended up achieving their goal by the end of the rally, profiting from the retirements of the two leaders.

Kris Meeke: “The first stage was really very difficult. When I learned that Jari-Matti had stopped, it didn’t really change my state of mind. I wasn’t affected by the possibility of winning… I was relaxed and focussed at the start of SS16. But I had a pace note that was a little bit too optimistic at the start of the stage. We hit something with the front wheel. I felt a big vibration and we went off on the next corner and crashed into a wall. I’m really disappointed for everyone in the team, who have been working so hard to get results. But we showed that we were on the pace. We’ll have to start thinking about the next rally now.”

Mads Østberg: “I’m pleased to have made it to the end of the rally. Before the start, the goal was to finish in the top 5. Unfortunately, we weren’t consistent enough on all of the stages. It’s still a decent result, because we are only twenty seconds off the podium. We were just missing a little something, although the most important thing was to rack up the miles and experience for the upcoming events on tarmac.”

Yves Matton (Citroën Racing Team Principal): “It’s really disappointing, because we were so close to winning. The team and Kris Meeke had had a perfect rally until this morning. We had wanted to be in position to take advantage of the slightest opportunity. Unfortunately, we were unable to grab it when it came along. Kris had a very good rally. After Finland, he continued to improve his pace. In Australia, he’ll be able to show us what he is capable of again. Mads had a different goal here. He had to prepare for the Rallye de France and he ended up just over twenty seconds shy of the podium. We also saw a great contest in the Junior WRC with the third win of Stéphane Lefebvre and some fine performances from Eric Camilli and Christian Riedemann.”

SS16 – Grafschaft 1 (19.27km) – The new rally leader, Kris Meeke also went off in the opening stages of this test. Thierry Neuville took over as leader, ahead of Dani Sordo and Andreas Mikkelsen. Mads Østberg moved up the standings again, into sixth place.

Citroën : On course for another podium finish