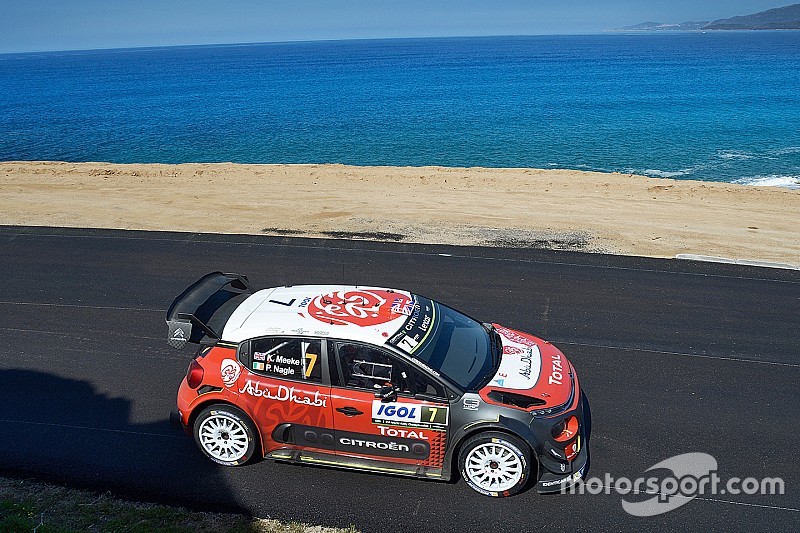 Kris Meeke inched further away from Sebastien Ogier on the second loop of Tour de Corse's Friday stages in the fourth round of the 2017 WRC season.

M-Sport Ford driver Ogier became the first man to beat Meeke's Citroen to a stage win in SS3, the first of two tests in the afternoon, but only by 0.8 seconds.

Meeke then responded by going fastest by 2.2s on SS4, and holds a 10.3s lead overnight.

Thierry Neuville is doing his best to tag along with them in the lead Hyundai, but spent Friday enormously frustrated that however many risks he took he was still losing time to the Ford and Citroen ahead. He is 25.8s off the front in third.

Neuville is at least no longer under pressure from behind, as Ott Tanak slid into a ditch in the second M-Sport Fiesta on the afternoon's first stage, and had to retire.

Craig Breen moved up to fourth by just 1.4s over Dani Sordo in a tight afternoon battle, with Jari-Matti Latvala only 6.4s further back in the sole Toyota to complete the day unscathed after Juho Hanninen's morning crash and fire.

With only a tyre fitting zone available at lunchtime not a full service, Elfyn Evans was stuck with the hydraulic problems that hit his DMACK Ford on SS2 for the rest of the day.

He made it through, but is nearly seven minutes away from the leaders now, and the Welshman is likely to end the day near the foot of the overall top 20.

Hayden Paddon and Stephane Lefebvre completed the trouble-free main class runners in seventh and eighth, with Andreas Mikkelsen up to ninth and now dominantly leading in WRC2 following a crash for pursuer Eric Camilli.

The fine start to Stephane Sarrazin's owner/driver career continued as he moved his Sarrazin Motorsport Skoda up to 10th overall, just 20.5s behind Mikkelsen's works example, and comfortably clear of all the other R5 cars.