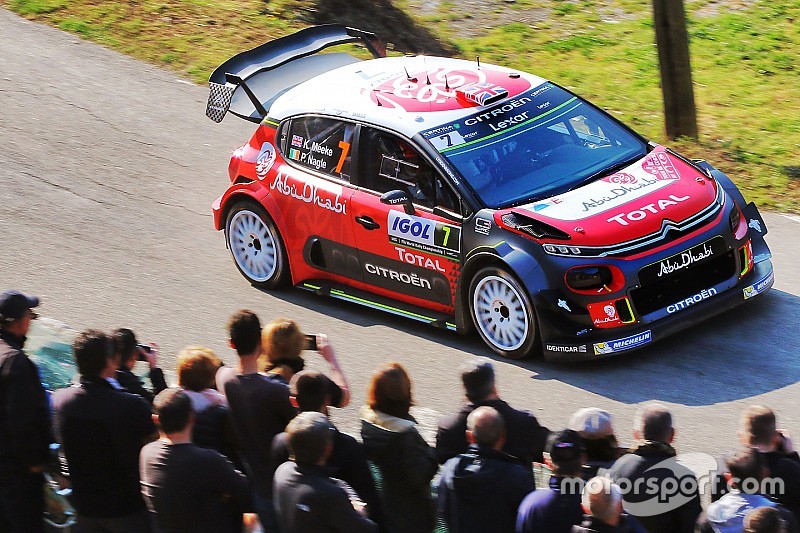 Kris Meeke grabbed the early advantage on the first dry asphalt rally of the 2017 WRC season by establishing his Citroen in the lead on Tour de Corse's opening stages.

Meeke was quickest on both the Pietrosella-Albitreccia and Plage du Liamone-Sarrola-Carocpino stages, and is 8.9 seconds clear of points leader Sebastien Ogier's M-Sport Ford.

Hyundai's Thierry Neuville drifted away from Meeke and Ogier in third through the morning loop, with the second Fiesta of Ott Tanak on his tail.

Tanak and Dani Sordo were tied for fourth following SS1, but a strong time from Tanak on SS2 drew him clear and left Sordo to fend off the second Citroen of Craig Breen.

Citroen is running three 2017 cars for the first time this week, with Stephane Lefebvre running ninth behind Hayden Paddon.

Toyota has had a tough start to its first factory Corsica appearance of the 21st century.

Jari-Matti Latvala felt his driving was too "hesitant" all morning, and is already 34s off the lead in seventh.

His teammate Juho Hanninen looked like he would be in the podium fight based on his split times before hitting a bridge near the end of SS1.

That caused a fluid spillage that then led to a fire.

Hanninen extinguished the blaze and got to the stage end after a 14-minute delay, but he decided to retire on the way to SS2.

Elfyn Evans was ninth after SS1, as his DMACK tyres proved less competitive than the Michelins on asphalt, then tumbled right down the order when hydraulics problems set in on the next stage and cost him over two minutes.

Andreas Mikkelsen resumed his WRC2-leading form from his last Skoda appearance in Monte Carlo, though M-Sport's Eric Camilli is just 5.8s behind in the class as they hold 10th and 11th overall.

While not registered for WRC2, Sarrazin is within 10s of R5 category pacesetter Mikkelsen.