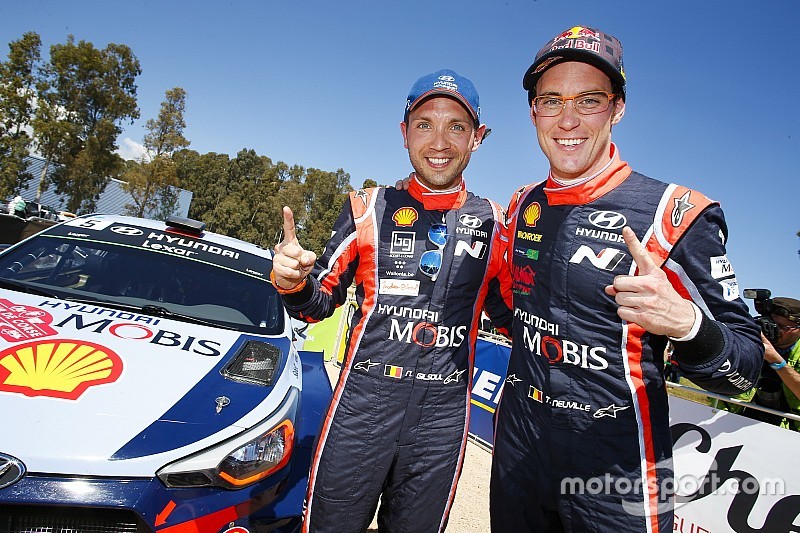 Thierry Neuville took his and Hyundai’s first WRC victory of the season in the Tour de Corse, making it four different winners in four different cars so far in 2017.

The turning point of the rally came in Saturday afternoon's stages, with sections of loose gravel and narrower roads suiting Neuville and co-driver Nicolas Gilsoul.

In the last stage of the morning, Novella, they overcame Sebastien Ogier’s M-Sport Ford Fiesta for second.

In the same stage, Kris Meeke’s Citroen retired from the lead with engine woes, giving Neuville a net lead he wouldn't lose.

While he crashed out of the lead in the first two events of the season while leading, fastest stage times in SS8 and SS9 secured the win this time around.

Ogier held second behind Neuville after Meeke’s C3 WRC expired, but dropped time on the final stage of Saturday, his Fiesta relegated to rear-wheel drive, and no paddleshift with hydraulic issues.

More issues followed on Sunday morning for Ogier, who also suffered electrical problems. The Frenchman reported the car had "no power, anti-lag or handbrake" at the end of the event.

Despite losing second to Dani Sordo in the penultimate stage, he won the place back in the Power Stage to take second, 54.7s behind Neuville.

Sordo declared Saturday morning's opening stage the "worst of his career", but the noted asphalt specialist made sure Hyundai had two drivers on the podium taking third.

He kept at bay a rampant Toyota of Jari-Matti Latvala, who stole fourth from Craig Breen – the sole remaining Citroen – by 0.1s in the Power Stage after what he described as a "crazy attack".

That gave him the Power Stage victory, and the five championship points that go with it.

Breen took fifth despite doing the whole Novella stage on Saturday with no intercom.

Hayden Paddon was the last WRC car in the top 10 in sixth, continuing his asphalt development.

Ott Tanak finished just outside the top 10 after he crashed on Friday, and then suffered a spark plug issue on Saturday.

Andreas Mikkelsen returned to WRC2 to take victory for Skoda, steering his Fabia R5 a lead margin of 1m06.3s, as he continues his attempts to get back in a WRC seat.