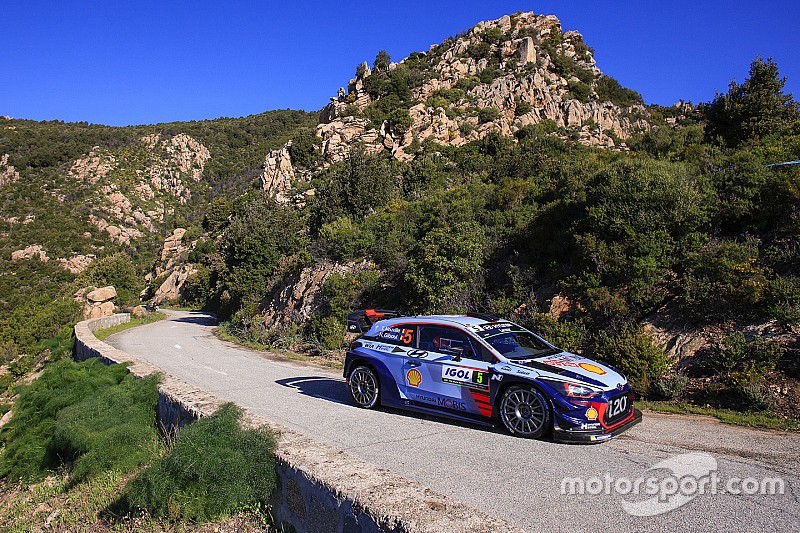 Thierry Neuville leads the Tour de Corse ahead of the final day of the event after Sebastien Ogier’s charge was brought to an end by hydraulic problems.

In the first stage of the afternoon, M-Sport Ford driver Ogier took six seconds out of Hyundai’s Neuville in the battle for the lead, but on SS8, Ogier had trouble with gearshifts and his car was rear-wheel-drive only.

Neuville went quickest of all on that test while his rival suffered, extending his lead to 38.9s with two stages to go.

He had taken the lead in the last stage of the morning, when he took second from Ogier, and then Citroen’s Kris Meeke retired from the lead with an engine problem simultaneously.

Hyundai teammate Dani Sordo sits third, 18.8s behind Ogier. He said he’d pushed to the “maximum” on SS8, but still sits just under a minute behind Neuville.

Jari-Matti Latvala showed newfound pace in his Toyota Yaris, and still remains within striking distance of Sordo, 11.7s behind.

A change to the rear differential meant the Finn was much more comfortable with his car in the afternoon.

Not for the first time this season, Craig Breen is the highest-placed Citroen, as his teammates Meeke and Stephane Lefebvre have retired.

The Irishman didn’t take any risks and continues to get seat time in the 2017 car after missing the previous round in Mexico, and is only 2.8s behind Latvala at the end of the day.

Hayden Paddon is the last WRC car in the gaggle of leaders. He was happier with his car in the afternoon loop, but lies half a minute behind Breen.