Evans on course for career best in Mexico

Rookie Evans is on course for a career-best fourth whilst Hirvonen was back to his best after yesterday’s disappointment – climbing four places from 12th to eighth.

M-Sport’s Elfyn Evans and Mikko Hirvonen were on form as Rally Mexico resumed with seven stages through the Sierra de Lobos mountain range today. Continuing his impressive drive, rookie Evans is on course for a career-best fourth whilst Hirvonen was back to his best after yesterday’s disappointment – climbing four places from 12th to eighth.

With what is arguably one of the most impressive drives of the weekend, Evans found himself battling for a podium position through the day’s opening speed tests – an inspiring performance on what is the Welshman’s first taste of Mexico’s high-altitude stages. 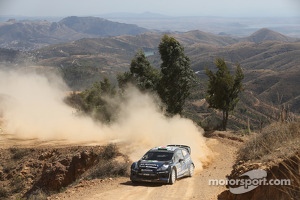 Yet he and co-driver Dan Barritt refused to be distracted from the job in hand. Despite the tempting prospect of a maiden podium, the pairing kept their composure – setting a highly consistent pace without being drawn into any unnecessary risks in pursuit of their rivals.

With 80 competitive kilometres left to run, the 25-year-old remains well and truly in the hunt – ready to pounce just 47 seconds adrift of the sought-after third place. The Mexican fixture is not averse to final-day drama, and there remains all to play for as Evans chases a strong finish behind the wheel of his Ford Fiesta RS WRC.

Following yesterday’s disappointment, Hirvonen was let loose – testing the limits to gain further assurance with the Fiesta RS WRC on gravel. Testing a range of set-up configurations, he and co-driver Jarmo Lehtinen gained a wealth of knowledge ahead of the upcoming loose-surface events.

Having lost none of his confidence, the Finn upped his pace through the afternoon to affect a vast improvement from the first to second pass of Ibarrilla – his second run some 20 seconds faster than his first attempt. Setting a constant string of top-three stage times, Hirvonen also secured the second fastest time on what will be tomorrow’s points-paying power stage – just 0.3 seconds adrift of the stage victory.

Climbing from 12th to eighth, the Finn is on course for a solid points haul – not to mention the potential for further gains as the event concludes with a final, challenging stint tomorrow.

“On the whole I think we can be pretty happy with what we have done today. The only real disappointment was on the longer stages – we had a couple of little impacts with a few big stones and that made me a little conservative through the rest of the stage. Then as the surface got more sandy and loose, I wasn’t so comfortable with the grip and we lost time.

“For our first time here, I think we can be pleased with the progress we have made today. We know that there is still some work to do, and I don’t think we’ll be able to catch the third position on speed alone, but all in all it’s been a comfortable day and not a bad result at the end.”

“We’ve had a good day and a really good rhythm through all of the stages. We’ve tried a few different things with the set-up and I am really happy with the handling of the car so it’s looking good for the next gravel events.

“We also had a really good run through what will be the Power Stage tomorrow. We made a couple of small mistakes, so I believe that we can be fast through there tomorrow. Of course I am sure that the others will be pushing too, but I have a really good feeling at the moment so let’s just wait and see.”

“We’ve seen another very mature drive from Elfyn [Evans] today. It was very tempting for him to get drawn into a battle for the podium, but we decided to opt for the safer approach. This is a development year for him so it is important that he gets to the end of the events that he is contesting for the first time – and fourth position will still be an absolutely fantastic result for him.

“It was also great to see Mikko [Hirvonen] follow on with his performance from yesterday. He’s shown good pace through all of the stages, and his strong time through what will be the Power Stage is very encouraging for tomorrow.”