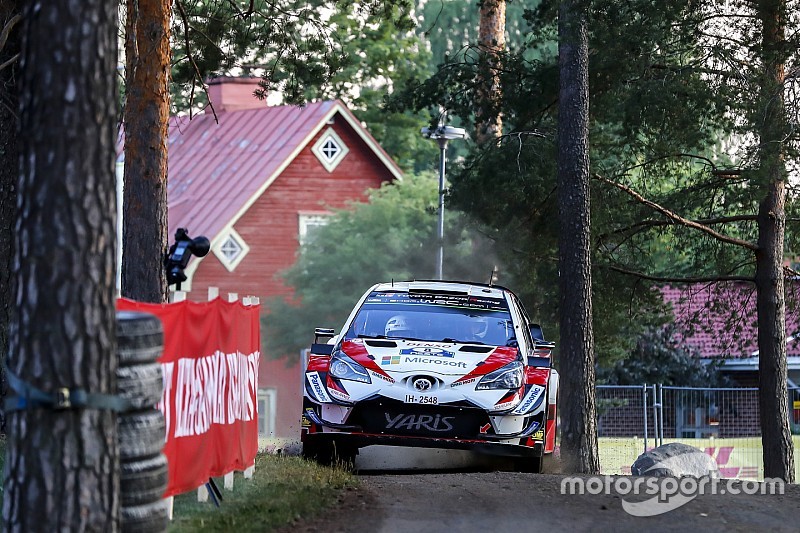 Toyota World Rally Championship driver Ott Tanak edged his lead over Mads Ostberg up to 5.8 seconds by the end of the first full day of Rally Finland.

When Tanak's Toyota faltered out of a hairpin on the afternoon's opening Oittila stage, Ostberg inched into a lead of just 0.1s - which he held on the following Moksi stage as the pair set identical times.

Ostberg then built his cushion up to 1.9s with a strong run on Urria, but after that higher tyre wear on his Citroen than Tanak's Toyota meant his day went downhill.

A stage win for Tanak on Assamaki put him back into the lead by a second, and quicker-than-Ostberg times on the subsequent Aanekoski and Harju stages established his overnight advantage.

The Toyota driver was soon back in front in that battle, but could not keep pace with the top two and is now 23.1s from the lead.

Suninen later lost out to Hayden Paddon's Hyundai too, and then fell further away with a brake problem on the Harju street stage.

Sebastien Ogier ended the day a canny sixth, and much better placed for the rest of the weekend than WRC title rival Thierry Neuville.

Ogier's M-Sport teammate Elfyn Evans slowed on the Aanekoski stage to give the champion an extra position before the day two running order was set on results ahead of Harju.

Running second on the road, Ogier had come under growing threat from the recovering Esapekka Lappi and Craig Breen through the afternoon but he and Evans managed to stay just clear of Lappi, and Breen was delayed by a fuel feed problem on the final stage.

The same issue hit the third Citroen of Khalid Al-Qassimi, raising fears of trouble for Ostberg.

The lead contender had no trouble, though, suggesting that his longer wait before the stage meant his car was running at a different temperature and did not trigger the glitch.

After his morning spin, Neuville's position at the head of the start order on the dusty roads meant he was the slowest of the WRC frontrunners on most stages and fell away in 10th.

The only consolation is that he won't be first on the road on Saturday because his Hyundai teammate Andreas Mikkelsen is even further behind thanks to his morning crash.

Mikkelsen did more damage to his i20 clipping a tyre chicane on the street stage and is now 15th overall.