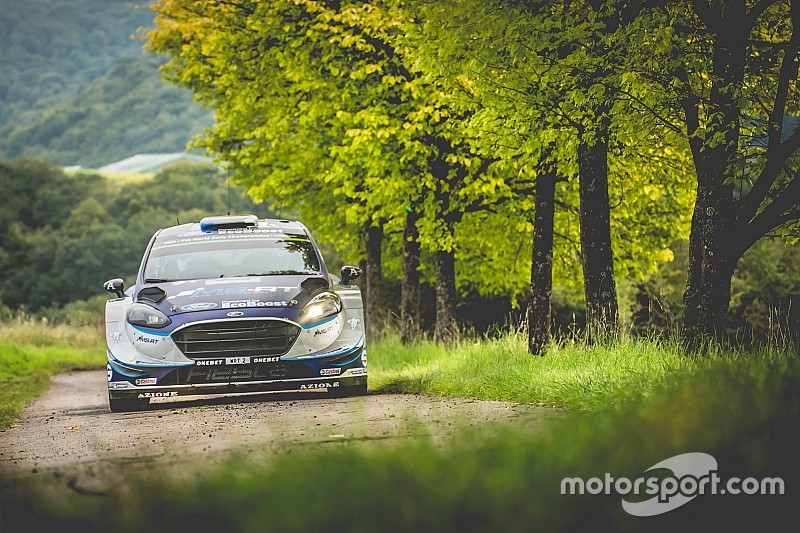 Heavy rain during the service break prompted the first competitive use of the World Rally Championship's 'full wet' tyres - nicknamed the 'monsoon' compound - for the Mittelmosel and Grafschaft stages.

M-Sport Ford driver Tanak carried a mix of full wets and soft slicks and was fastest on both stages, despite an error on Mittelmosel.

He closed to within 0.9 seconds of Mikkelsen's Citroen by the end of that one and then took the lead by winning Grafschaft too.

Mikkelsen, who had started the afternoon running wets all round, will start Saturday 5.7s off Tanak.

Ogier had fared best of those running slicks all round on the long stages and looked set to end the day at the tail of a three-way lead battle with Tanak and Mikkelsen.

But he spun on the Wadern superspecial that closed the leg, losing 20s and falling to fourth - 2.4s behind title rival Neuville.

Hyundai driver Neuville had gained fifth place when Jari-Matti Latvala's Toyota developed a misfire on the pre-service running of the superspecial at lunchtime, then grabbed fourth from Elfyn Evans's DMACK Ford on the first afternoon stage.

Though Ogier's error then put him into the top three, Neuville is half a minute away from leader Tanak.

Evans looked set to lose fifth to Esapekka Lappi's Toyota until the Rally Finland winner crashed out on Grafschaft.

Juho Hanninen is therefore the leading Toyota in sixth, a position he picked up when Craig Breen emulated Ogier's superspecial spin.

Latvala's misfire cost him nearly a minute and a half, but he was soon back ahead of a low-on-confidence Hayden Paddon and ends the day eighth.