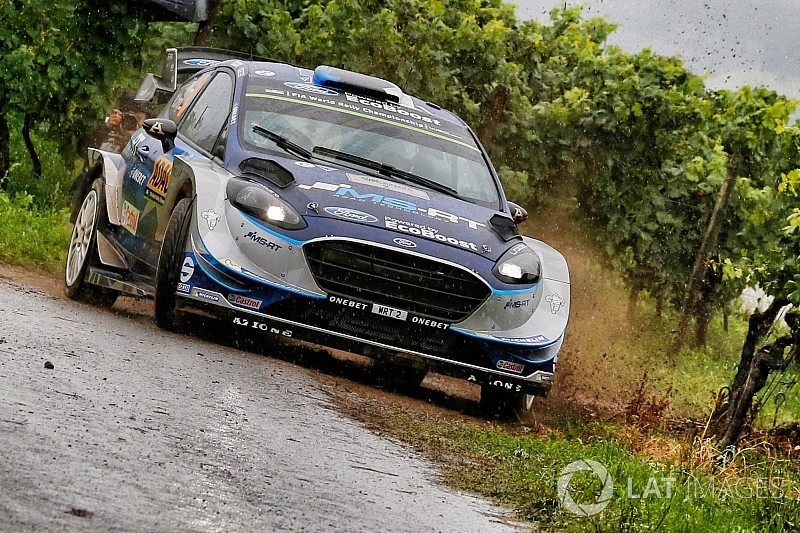 M-Sport Ford driver Tanak started the morning with a 5.7s lead over Mikkelsen heading into the short Arena Panzeplatte superspecial.

Tanak topped the opening stage of the day, but he really started to build a gap on the full version of Panzerplatte, as Mikkelsen struggled with the tricky conditions and ended the 26-mile stretch 15.3s behind.

The Estonian continued to capitalise on Mikkelsen's troubles through Freisen. Tanak was once again quickest through the stage, but Mikkelsen had no such luck.

The Citroen driver spun at a late junction and stalled, which increased Tanak's lead to 25.7s.

Mikkelsen was able to regain 2.7s on the final stage of the opening loop. He finished Romerstrasse quickest to head into the afternoon 23s off the lead.

Sebastien Ogier spent the morning edging closer to his former Volkswagen teammate for second, after title rival Thierry Neuville retired following the opening stage of the day with irreparable damage to his left rear wheel.

A cautious Ogier made the most of Mikkelsen's earlier incidents to go into the afternoon loop just 6.3s adrift.

Toyota's Juho Hanninen was one of the surprises of the day. The Finn completed the fearsome Panzerplatte stage 2.4s faster than Ogier to take the stage win.

Hanninen is currently locked in a tight battle with Elfyn Evans for fourth. He gained significant time on the DMACK Ford driver through the final three stages of the loop to head to service just 0.8s behind the Welshman, who completed Romserstrasse with visible cosmetic damage after clipping a hay bale.

Craig Breen and Jari-Matti Latvala are separated by 17s in sixth and seventh. Both drivers finished the opening loop visibly upset. Latvala in particular was disappointed with his run through Freisen, which included an off-road excursion into a field.

Jan Kopecky continued to extend his lead in WRC2 ahead of Eric Camilli. He holds a 12.5s lead following the opening loop, while WRC2 points leader Pontus Tidemand is currently on course to claim the championship in third.

M-Sport: Team orders only an option with a “clear 1-2”