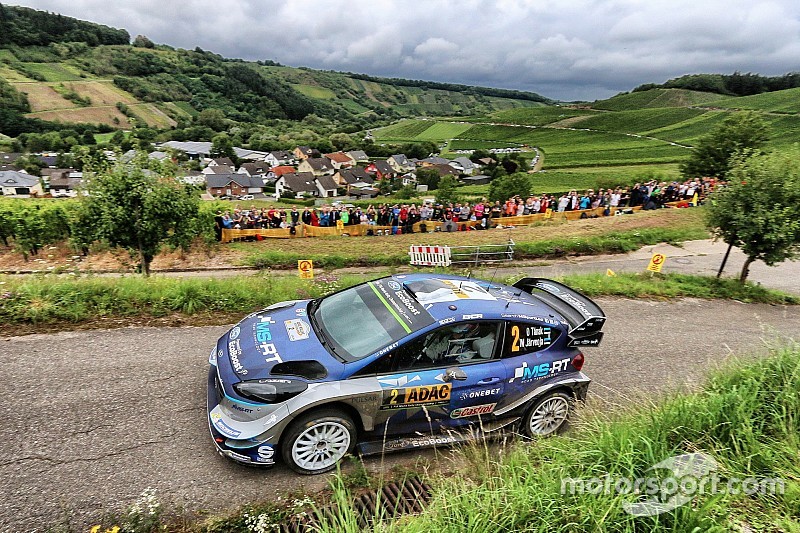 Ott Tanak maintained his Rally Germany lead over Andreas Mikkelsen on Saturday afternoon, while Sebastien Ogier continued to remain in touch with the leaders.

Despite taking a cautious approach, Tanak was able to increase his advantage over Mikkelsen by 3.7 seconds over the two runs of the Arena Panzerplatte stage.

But Mikkelsen pulled 1.5s back on the main Panzerplatte stage, before gaining a further 3.8s through Freisen and Romerstrasse.

The Citroen driver also increased his advantage over Ogier heading into the final day to 8.2s, despite Ogier being the only driver from the top three to take a stage win, which he did on Freisen.

With his World Rally Championship title rival Thierry Neuville retiring from leg two with suspension damage on the morning's opener, Ogier admitted he was driving with one eye on the points.

DMACK Ford driver Elfyn Evans was able to reclaim fourth position from Juho Hanninen after the Toyota suffered damper issues at the end of Panzerplatte.

Hanninen had relieved Evans of fourth place on the opening stage of the afternoon loop. But by the end of his run through Freisen, Hanninen’s issue became a major problem and he ended the day 4.2s behind the Welshman.

Craig Breen was able to have his deficit to Evans and Hanninen to just 14.2s, which brings the Irishman into the battle for fourth heading into the final day.

Hanninen wasn’t the only driver to suffer through Panzerplatte. Kris Meeke, who crashed on Thursday’s superspecial, was forced to retire there due to a suspected water-pump failure.

Meanwhile, Jari-Matti Latvala, who took the final stage win of the day, Jan Kopecky and Esapekka Lappi all complained of slow punctures after hitting small stones or cuts in the surface.

This meant that Kopecky lost his WRC2 lead to Eric Camilli, while Pontus Tidemand remains on course for the championship in third.

Dani Sordo, who briefly led on Friday before crashing out on Grafschaft, had a much better day on Saturday.

The Spaniard was imperious on the afternoon’s Panzerplatte stages, setting the quickest time on all three runs.