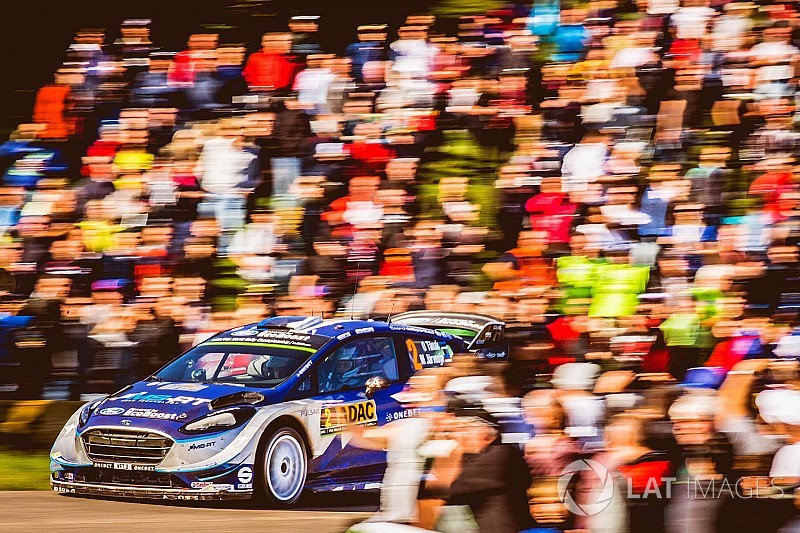 Tanak, who scored his maiden WRC win earlier this year in Italy, has led uninterrupted in Germany since SS7, after he had seen off early challenges from Ogier and Citroen's Andreas Mikkelsen.

He had entered the two final Sunday stages 18 seconds clear of Mikkelsen and duly brought his Ford Fiesta WRC home to claim the win.

Making his third appearance for the Citroen works team, Mikkelsen secured the French manufacturer's first podium finish since Kris Meeke's Mexico win in round three of 2017.

Mikkelsen ended up 14 seconds ahead of third-placed Ogier, who was the only driver on the podium to pick up bonus points in the Power Stage – where he was fourth.

Having overhauled Elfyn Evans earlier on Sunday, Juho Hanninen finished as the lead Toyota in fourth, while the Welshman himself was then also shuffled down to sixth by Citroen's Craig Breen.

Breen had closed to within two seconds of Evans by topping the penultimate stage and did enough in the Power Stage to clinch his sixth fifth-place finish of the campaign.

Jari-Matti Latvala was seventh for Toyota, ahead of the top Hyundai of Hayden Paddon and M-Sport's local guest driver Armin Kremer.

Eric Camilli and Jan Kopecky took the first two spots in the WRC2 classification, the former scoring his first win in the class.

Pontus Tidemand's run of seven straight top-two finishes ended with a third place, which was still enough to hand him the 2017 WRC2 title.

After his Hyundai retired from Saturday with a suspension issue, Neuville returned to competition under Rally2 rules with the aim of scoring points in the Power Stage.

But while fellow Rally2 runners Dani Sordo and Esapekka Lappi locked out the top two spots through the 13km St. Wendeler Land, Neuville came through 3.5s off and did not pick up any bonus points.

This leaves him 17 points adrift of Ogier with three events to go, with Tanak now only 16 points down on the Belgian.