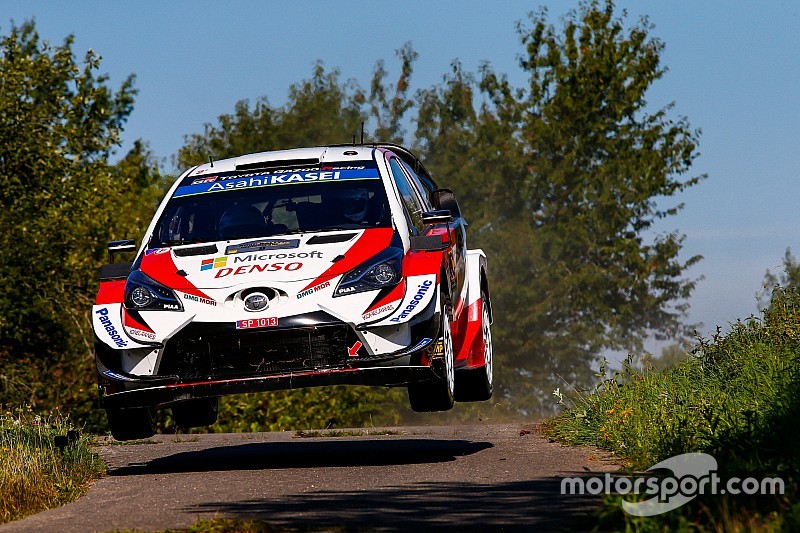 Ott Tanak’s WRC lead has been extended to 35 points over Thierry Neuville after recording a third successive Rally Germany victory for Toyota.

Tanak led a clean sweep of the podium for the Japanese marque, with Kris Meeke coming home 20.8s in arrears and Jari-Matti Latvala taking third.

Neuville salvaged fifth behind Hyundai teammate Dani Sordo on the Power Stage – which he won –after falling out of victory contention after changing a wheel at the end of Saturday’s running.

He now moves ahead of six-time WRC champion Sebastien Ogier – who also had to change a wheel following a puncture – in the standings, 13 points clear of the Frenchman.

Motorsport.com understands Sordo will check in late to hand Neuville fourth place, gifting the Belgian a further two points in his pursuit of Tanak.

Esapekka Lappi finished as the best Citroen driver in sixth, just four seconds ahead of Hyundai’s Andreas Mikkelsen following a lively battle between the pair of Sunday morning.

Mikkelsen began the day almost six seconds in front but Lappi moved ahead following the opening passage of Grafschaft, with the positions swapping on the following two stages.

Lappi then beat Mikkelsen by nearly 1.6s to secure sixth on the Power Stage.

His Citroen teammate Ogier however, had a nightmare event and finished a frustrated eighth, scoring just one Power Stage point.

Bemoaning a car he “cannot drive” on Sunday morning, a dejected Ogier finished 1m56s behind winner Tanak, and is now 42 points adrift in the championship.

Gus Greensmith was the highest-placed M-Sport car in ninth in what was a tricky event for the Cumbrian team, comfortably ahead of Toyota newcomer Takamoto Katsuta in 10th.

The key weapon WRC teams are scrambling to secure