Hirvonen to return to the Ford fold for Finland

Ford today named Mikko Hirvonen as its second nominated driver for Rally Finland, joining Toni Gardemeister as the two drivers eligible to score points for the World Rally Championship manufacturers' title. Hirvonen will now return to the team he ...

Ford today named Mikko Hirvonen as its second nominated driver for Rally Finland, joining Toni Gardemeister as the two drivers eligible to score points for the World Rally Championship manufacturers' title. Hirvonen will now return to the team he drove for in 2003 as the third works driver. 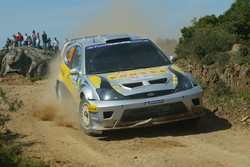 Mikko Hirvonen and Jarmo Lehtinen.
Photo by Ford Motor Company.
According to Malcolm Wilson, the team director of the BP-Ford WRC team, the defining factor was Hirvonen's outstanding performance on Acropolis Rally, where he finished fifth with co-pilot Jarmo Lehtinen in a 2003-spec Ford Focus.

"Mikko has shown excellent speed on both the Rally Italia Sardinia and the Acropolis Rally of Greece in a car that is two years old," Wilson explained. "The Rally Finland is the most specialised event in the championship and it takes several years' experience of the roads there before a driver can hope to be truly competitive. Mikko grew up on Finnish roads and the combination of his understanding of the nature of the stages and his speed means he deserves his chance."

Hirvonen has been one of the most positive surprises of the 2005 season, running consistently well in a privateer Focus WRC. The expectations had been low, as he had struggled from time to time in 2004, and subsequently lost his Subaru WRC drive to Stephane Sarrazin for the 2005 season.

"This is fantastic, and a huge vote of confidence for me," Hirvonen beamed. "I am totally committed to getting the very best possible result for Ford and, personally for Malcolm. Returning to the Ford team means I will be working with old friends so there will be no problems in settling in. I haven't driven the 2005-specification Focus RS before but I will have a day's testing in Finland before the rally to enable me to get used to it." 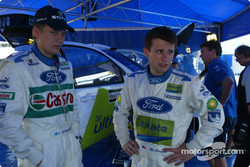 Toni Gardemeister and Roman Kresta.
Photo by Ford Motor Company.
Hirvonen scored the stage win on the Acropolis opening stage, thus taking a (short-lived) lead in the rally, and ended the rally in a creditable fifth place in a privately-entered Ford Focus WRC 2003, beating out Mitsubishi pilot Harri Rovanpera. The second Ford works entry, with Roman Kresta and Jan Mozny, retired twice, first due to running off road, and for the second time due to an electrical fault.

Kresta will still take part in Rally Finland in a works BP-Ford entry -- albeit a 2003-specification one -- but not as a nominated driver, taking the pressure off the young Czech pilot.

"This will help Roman come to terms with a rally that is new to him," Wilson explained the rationale. "He can discover the characteristics of the Finnish roads at his own pace without having to worry about pushing to score points for Ford. He has shown this season that he is a quick learner and this way, he can concentrate fully on gaining as much experience as possible."

Hirvonen, on the other hand, will be looking to get to the end of Rally Finland, as he has only finished in 2002, with retirements in 2003 and 2004. And he'll surely be hoping that this year again, as so often in the past, "to finish first, first you must be Finnish ..."