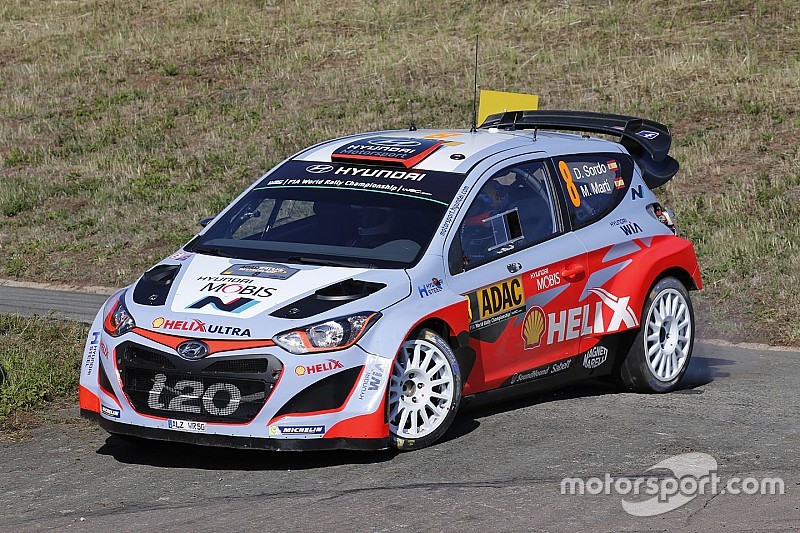 The Hyundai Motorsport team has had another solid day of competition in Germany.

The longest day of this weekend’s Rallye Deutschland has delivered another satisfying performance for the Hyundai Motorsport team with both Hyundai Shell World Rally Team drivers Dani Sordo and Thierry Neuville comfortably inside the top-five after 17 special stages.

Saturday’s itinerary has seen the WRC drivers tackle over 170km of stages including two runs of the daunting 45.61km Panzerplatte Lang - a renowned part of Rallye Deutschland with the infamous Hinkelsteine rocks.

All four Hyundai Motorsport drivers have made it safely to the end of an arduous day with plenty of improvements and a few technical issues successfully navigated along the way.

Dani Sordo picked up where he left off on Friday with a determined drive in both of today’s loops. The Spaniard finished the day fourth overall, 9.5 seconds ahead of his team-mate Neuville, having completed both passes of Panzerplatte with a top-five stage time.

Sordo commented: “We have worked hard today and I would like to thank the team, my engineer and mechanics for helping us to improve the car throughout the day. The morning loop was OK and we knew that Thierry was close to us on the classification. We set a good time in Panzerplatte but it was difficult to know how it compared because it is a long, long stage with no splits, so it’s easy to lose time without knowing it. We had a downshift problem at low gears in the afternoon but it didn’t really affect the stage times too much. The car felt nice and I didn’t expect it to handle so well. I enjoyed it but now we must bring the car home tomorrow to secure these important manufacturer points.”

Thierry Neuville also had a strong day of rallying and ends Saturday in a fine fifth place having swapped positions with his team-mate Sordo regularly during the day.

Neuville said: “It has been an exciting day with the close fight between myself and Dani and I am quite happy with my performance. We have found a good balance between pushing for position and playing it safe, knowing that championship points are important for myself and for the team. This morning, the pace notes worked well and I felt happy with the car. In the long Panzerplatte stage, the settings were not quite right and we had some understeer, which cost us some time. The afternoon pass went better and although we were a bit slower in the middle of the long stage, I was pleased with my time. I’m sure things will be as closely contested in tomorrow’s stages so we will continue with the approach we have taken today and see what happens.”

For Paddon (#20 Hyundai i20 WRC), it has been a tough day with lots of learning as well as a turbo-related technical issue, which has slowed the Kiwi on all stages. Despite that, he has fought to the end of the day and sits ninth overall.

Paddon said: “It’s been another demanding day but I am pleased to reach the end. We didn’t have the best of mornings. The first stages went OK but Panzerplatte was a big challenge. We had some set-up issues, which made it difficult to drive the car and wasn’t a great confidence-builder. We tried to improve in the afternoon but it seemed that we had a turbo problem, which we didn’t realise at service. It helped to explain some of the time loss because we had carried the problem from this morning and it was getting progressively worse. That gave me a bit more confidence because I was a bit disheartened at lunchtime. We will look at everything with the team tonight and hopefully there’ll be more to come tomorrow morning.”

Abbring (#10 Hyundai i20 WRC) is just outside the top-ten overall after the second full day of rallying. A power steering problem in the morning loop did not distract him from finding a rhythm and a positive afternoon loop gives the Dutchman confidence for Sunday’s four stages.

Abbring commented: “It’s been a pleasure to drive these stages today, especially the Panzerplatte which was a really nice experience for me. It was quite difficult in the morning because we didn’t have power steering but the team did a good job at lunchtime service to fix the problem for the afternoon loop. The second run went very well and I would like to thank the guys for allowing us to build our confidence this afternoon. We are getting there step-by-step, building the car around me and I am happy. Here’s to more tomorrow!”

While the drivers are rightly focused on their own programmes and battles, for the Hyundai Motorsport team the objective is firmly on picking up manufacturer points and to reclaim second in the standings. A trouble-free finish on Sunday is would be the ideal conclusion to this home rally.

Team Principal Michel Nandan said: “Understandably, everyone has been looking at the close battle between Dani and Thierry today, and it has certainly been exciting to see them swap fourth and fifth positions throughout the day. Hayden and Kevin have both experienced some technical issues today but they are to be commended on pushing through and showing their usual professional approach. As a team, our target is to keep both cars in the top-five tomorrow. We maybe can’t match the guys in the top-three but anything can happen in this rally - as we know from last year - so we will look to keep things steady tomorrow with the manufacturers’ championship firmly in mind.”

Sunday’s schedule consists of a repeated loop of the 19.59km Stein & Wein and 14.08km Dhrontal stages, with the second pass through Dhrontal being run as the rally-concluding Power Stage. Four stages over a total Special Stage distance of 67.34km is all that separates Hyundai Motorsport from a four-car finish on home tarmac in Rallye Deutschland.