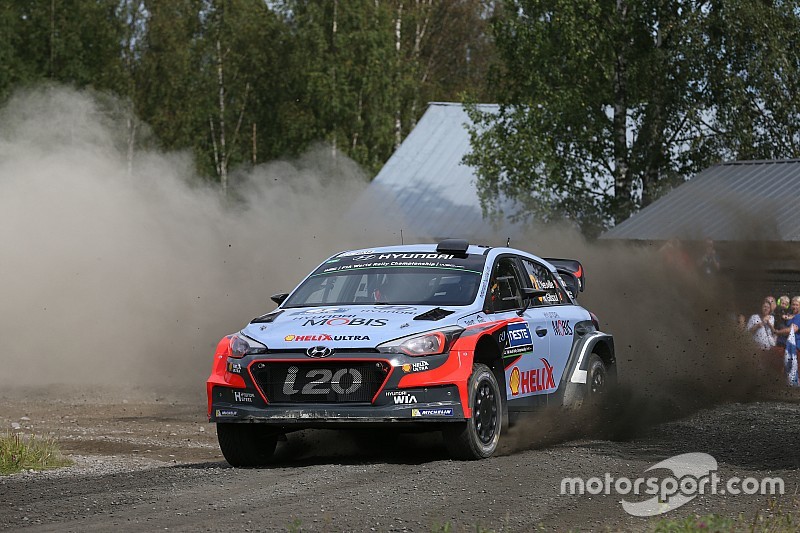 A positive final day for Hyundai Motorsport with a stage 1-2 in SS22 and in the Power Stage, with two cars inside the top-five

Hyundai Motorsport has completed Rally Finland with two New Generation i20 WRCs inside the top-five of the overall classification after a close fight throughout the weekend and a strong Sunday for the team.

On a positive final day, Thierry Neuville registered a stage win in SS22 (Oittila) with Hayden Paddon right behind. It marked the team’s 30th stage win of the season and a fourth stage 1-2 of 2016. They then added to that in spectacular style with a 1-2 in the rally-concluding Power Stage - picking up extra points.

Hyundai Shell World Rally Team drivers Neuville and Paddon have been inseparable all weekend, as they have fought hard for a podium finish. Ultimately, the pair had to settle for fourth and fifth positions despite reducing the gap to the podium to just 4.6-seconds during Sunday’s four stages.

The result gives Hyundai Motorsport a healthy haul of manufacturer points and helps to solidify the team’s second position in the WRC Manufacturers’ Championship.

Neuville (#3 New Generation i20 WRC) and co-driver Nicolas Gilsoul equalled their Rally Finland result from twelve months ago as they finished in fourth place. Although not the podium they were hoping for, it continues a strong run of results for the Belgian crew following victory in Sardinia and fourth place in Poland.

Neuville said: “We have given our maximum throughout the weekend and been absolutely on the limit. Unfortunately, it wasn’t enough to get on the podium - but it was very close! We had a strong finish with two stage wins today including the Power Stage, so that was a nice way to end the rally. It was particularly pleasing for the whole team to have a 1-2 in the Power Stage after a tricky weekend. We have had some difficulties with the car settings and grip levels on most stages so I think we can be reasonably satisfied. It was an exciting battle with Hayden and to have the opportunity to compete on these incredible Finnish stages is always a pleasure. There are definitely some more things we need to learn about the performance of our car in these conditions. We can now look forward to Germany - a rally where we have fond memories!”

Paddon (#4 New Generation i20 WRC) and co-driver John Kennard enjoyed a competitive Sunday with a quartet of top-two stage times, including second place in the Power Stage. The Kiwi crew finished right on the tail of their teammates in fifth after a tough weekend, earning valuable championship points.

Paddon said: “It’s been a challenging weekend but there are some positives to take away. We were second on the road for much of the weekend, so to come away with a top-five result is not too bad. We had a decent final day even if the driving was a bit untidy at times. We didn’t take any massive risks and concentrated on getting the cars home. With that in mind, to take 1-2 in the Power Stage was a nice consolation. We gave it our all but we’ve struggled with the car in the slippery conditions. It was a close fight with Thierry and I’ve really enjoyed these fantastic stages.”

Abbring (#20 New Generation i20 WRC) and co-driver Seb Marshall achieved their pre-rally objectives of a top-ten finish with ninth place overall. In their first WRC event in the New Generation i20 WRC, the crew had a solid Sunday, including a top-six time in this morning’s opening Lempäa stage.

Abbring said: “I am happy with how this weekend has gone all things considered. We haven’t made any mistakes and we’ve come away with a top-ten result in Rally Finland. It has been an extremely valuable learning experience and I’d like to thank the team for giving us the opportunity. The New Generation i20 WRC has performed well and it’s been a real pleasure to drive. We have made improvements with each stage, refining our pace notes and we’ve done what we set out to achieve.”

For Hyundai Motorsport, despite missing out on an elusive maiden Rally Finland podium by just 4.6-seconds, this weekend’s result continues a strong season. The team has completed one of the toughest rallies of the season with all three cars inside the top-ten, adding more manufacturer points to consolidate second position in the Championship.

Team Principal Michel Nandan commented: “We’ve had a better final day than the rest of the rally, that’s for sure. There’s no hiding from the fact we have had a challenging weekend so to take two stage 1-2s today, including the Power Stage was a positive way to end the rally. Thierry and Hayden have been involved in a close battle for most of the weekend, which was interesting to watch. Kevin and Seb did everything we expected of them. It was a big task to come to Rally Finland at short notice. They have acquitted themselves very professionally and fully deserve their top-ten finish. We have had a generally reliable weekend with the New Generation i20 WRCs. We just need to understand why we couldn’t get more out of the car on these stages. There are just a few weeks before we compete in Rallye Deutschland, which will be a special event for the whole team - and I’m confident we will come back fighting.”

The FIA World Rally Championship (WRC) moves next to Germany for Rallye Deutschland, round nine of the season from 18-21 August. It will be the home rally for the Alzenau-based Hyundai Motorsport team, who celebrated a memorable 1-2 result in the asphalt event two years ago.

Volkswagen would be supportive of Indian WRC round, says Capito