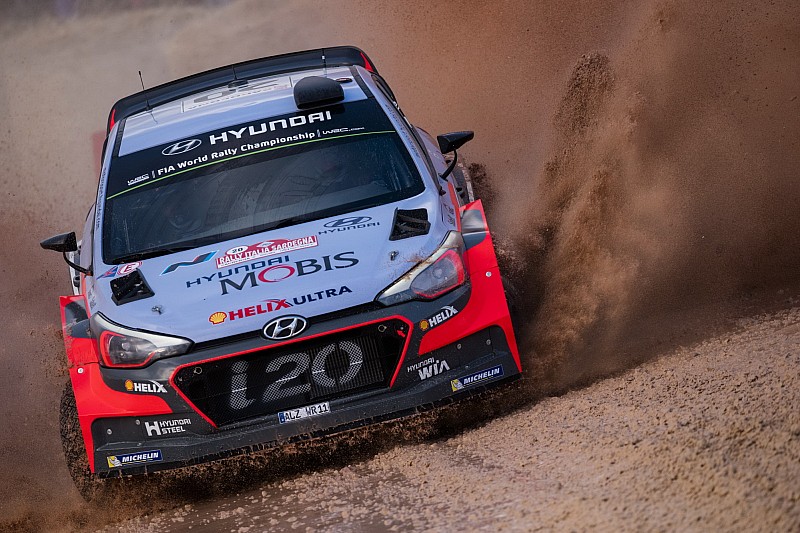 Thierry Neuville has ended the first day of action in Sardinia at the top of the timesheets, the Belgian claiming five stage wins from Friday’s eight runs.

Alghero, Sardinia – Hyundai Motorsport has made an encouraging start to the sixth round of the 2016 FIA World Rally Championship (WRC), with Thierry Neuville leading Rally Italia Sardegna at the end of Friday’s eight stages.

For Paddon and Abbring, however, it was a day of disappointment. Paddon was unable to finish the day after going off the road with his New Generation i20 WRC the end of SS7 (Tula 2), while Abbring endured a broken propshaft on the opening stage.

Neuville commented: “A great day for us and we were able to finish it by securing our 60th WRC stage win! I think everyone is pleased to see us back at the front, and we are definitely very happy to be here. Of course, we have to acknowledge that we have had a road position advantage today, with the benefit of the earlier drivers cleaning the road. However, we have had a pretty good run today with five stage wins and a lot of increased confidence for Nicolas and myself. Tomorrow’s stages will offer a different picture and it will be an interesting fight. All we can hope is that the car continues to give us a good feeling and that we can demonstrate the sort of pace we have had today.”

Sordo and co-driver Marc Martí (#4 New Generation i20 WRC) fought consistently on today’s stages and are firmly in the hunt for a strong points scoring finish this weekend. With six tough and challenging stages tomorrow, the #4 crew will still be hoping to improve on their position on the overall classification.

Sordo commented: “It was an OK day for us and it’s good to be inside the top-six. We have been lacking a bit of confidence on most stages today. The conditions were quite slippery at times. We found the car to behave quite well overall, but it was difficult to drive outside the line on the afternoon loop. We need to find some modifications to improve the car a bit for tomorrow. The final stage today (SS9) played to our strengths and we could set a good time. There are some tough stages left in this rally so we have to keep pushing and seeing where we can make up time.”

In their second WRC event of the season so far, Abbring (#10 Hyundai i20 WRC) and co-driver Seb Marshall experienced a broken propshaft during the morning loop, which hampered their day. They had to complete the morning stages with front wheel drive only and were then playing catch-up in the afternoon loop.

Abbring commented: “We wanted to have a better start to this rally after our struggles in Portugal, but it wasn’t to be. We broke the propshaft which meant we had front wheel drive only and that forced us to nurse our way through the morning loop. We were able to fix things at lunchtime service and in the afternoon, we took things cautiously to try and build a rhythm but it was far from straightforward. Still, the rally is not over yet and we look forward to a more productive, positive and useful learning experience tomorrow.”

Having finished on the podium in Sardinia twelve months ago, Paddon and co-driver John Kennard (#3 New Generation i20 WRC) were aiming for a repeat performance. Unfortunately, they lost time in the morning loop after clipping a wall in SS4, and were then forced to retire for the day after an ‘off’ in SS7. The team will assess the damage on Paddon’s car later in the evening and check if the damage is reparable.

Paddon commented: “There are no words to truly convey our disappointment with today. It’s been another one to forget and I can only say that I’m sorry to the team - it was a silly mistake. We didn’t have a good morning loop and were frustrated that we lost a lot of time through a spin, and subsequent contact with a wall that damaged our rear suspension arm. We were hoping to get things back on track this afternoon but we had an off at the end of SS7 which meant our day was over.”

Thierry and Nicolas back at the top of a WRC standings

Sardinia was a positive rally for Hyundai Motorsport twelve months ago with Paddon and Neuville securing the team a double podium. With Neuville setting the pace on the opening day, the team will be hoping to renew its podium charge in the remaining two days.

Team Principal Michel Nandan commented: “We’ve all delighted in seeing Thierry and Nicolas back at the top of a WRC standings today. They have had a strong day, making the most of their road position, to secure five stage wins and to put themselves in contention for the podium this weekend. A great opening day for them and for the team! Dani has had a trouble-free day in sixth and he will be pushing tomorrow to find more performance in an effort to move up the classification. On the other side of things, Kevin struggled with a broken propshaft on the morning loop, which was not an ideal way to start his second event of 2016. It was another disappointing retirement for Hayden. He is quick to acknowledge what happened and we appreciate his honesty; this is rallying and these things happen. We will wait for the car to return to service to assess the damage and check if he will be able to re-join tomorrow under Rally 2 regulations.”

Saturday’s itinerary takes in a repeat loop of three stages - the 22.20km Monti di Alá, 22.39km Coiluna-Loelle and the longest stage of the weekend, the 44.26km Monte Lerno.