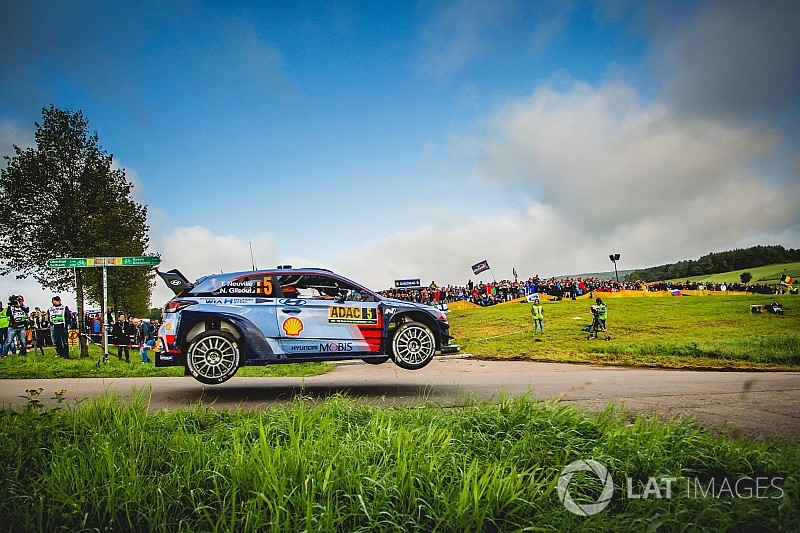 Hyundai Motorsport aims to get its 2017 FIA World Rally Championship (WRC) hopes back on track with a three-car entry into Rally de España, the 11th round of the 13-event season, next week.

Getting back into the mix

Spain’s composition of gravel and tarmac roads offers a unique challenge for drivers and teams alike. The rally gets underway on Thursday evening with a ceremonial start at Salou before the opening gravel stages begin on Friday morning. The itinerary for the first day will be familiar to crews from last year’s rally. The highlight will be the 38.95km Terra Alta stage, which includes occasional tarmac sections, and requires careful tyre choice and due diligence from inside the cockpit.

The mechanics have the biggest workload on Friday evening as they transform the Hyundai i20 Coupe WRC cars from gravel to tarmac spec – all in the tight timeframe of a 75-minute service. Saturday’s schedule includes new stages and old before a final gruelling push on Sunday covering six stages without the luxury of service.

Following two disappointing events in Finland and Germany, Hyundai Motorsport wants to re-position itself at the forefront of the WRC with a strong performance in Spain. The team has historically performed well at the event, having taken a third-place finish in 2015 and a double podium (second and third) in 2016.

In preparation for this year’s Spanish campaign, the team carried out two test sessions in September with all three crews on tarmac and gravel. An upgraded aerodynamic package – which includes a new front bumper and rear wing - will be used in an effort for Hyundai Motorsport to fight at the front of the competitive WRC field once again.

Team Principal Michel Nandan said: “We have had a long summer break but we have used the time wisely to try and turn around our recent misfortunes. Finland and Germany were both frustrating, and saw us lose ground in the championship. From Spain, and in the final rounds of the season, we are determined to do all we can to catch up. We welcome Andreas and Anders into the team from Spain, an event they won memorably in 2015, alongside Thierry and Dani, who have both had podiums at this rally. For Dani, it will be extra special, as his home event, so we are in optimistic and hopeful mood. With an upgraded Hyundai i20 Coupe WRC, our primary target is to get back onto the podium.”

Mikkelsen and co-driver Anders Jæger have spent valuable time since their announcement as a Hyundai Motorsport crew visiting the team’s factory in Alzenau and testing the Hyundai i20 Coupe WRC. As a former winner of Rally de España, Mikkelsen is hopeful of positioning himself immediately in the thick of the action.

Mikkelsen said: “I am really pleased to be making my debut as a Hyundai Motorsport driver. Since the announcement, Anders and I have had the opportunity to test the car on both tarmac and gravel; I have been very impressed with what we’ve experienced. The car has already shown itself to be versatile, and there’s nowhere better than Spain to showcase those characteristics. It’s a special rally for me, as I took my first win in Spain in 2015, so it has fantastic memories. The changes in surface can be demanding, particularly with the quick switch from gravel to tarmac. It is a challenging, but highly enjoyable event, and I hope to be able to fight at the front in my first WRC event with the team.”

Belgians Neuville and co-driver Nicolas Gilsoul have it all to play for in the final three rounds of the season. Spanish podium finishers twelve months ago, the crew will want to recreate the sort of form that saw them win three rallies in Corsica, Argentina and Poland. Neuville has a 17-point deficit in the drivers’ championship to Sébastien Ogier, and a 16-point buffer to third-placed Ott Tanak.

Neuville said: “Entering this crucial part of the season for the championship, we must stay focused and look to target the podium, if not victory, in all rounds. Things are delicately positioned in the Drivers’ Championship between Ogier, myself and Tanak, so anything can still happen. Spain is going to be a huge challenge, as it always is with the change of surface. It is a rally that all crews enjoy, with a good atmosphere and, usually, great weather. We are rested after the long break and determined to put in our strongest fight for the title.”

For Sordo and co-driver Marc Martí, Rally de España is full of emotion as their home event. They already have two third-place results to their name in 2017, as well as twice finishing on the podium in Spain for Hyundai Motorsport, in 2015 and again in 2016. A hat trick will be their target next weekend.

Sordo said: “It is always a pleasure to return to Spain for my home rally, and to have the chance to compete in front of so many enthusiastic supporters. We definitely want to give them something to cheer. I think our road position will be beneficial on the opening gravel stages on Friday. We then move onto tarmac for the final two days, where we push to secure our third podium of the season – and our third in a row in Catalunya for Hyundai Motorsport. That’s the aim.”

Spain serves up a mixed platter of gravel and Tarmac