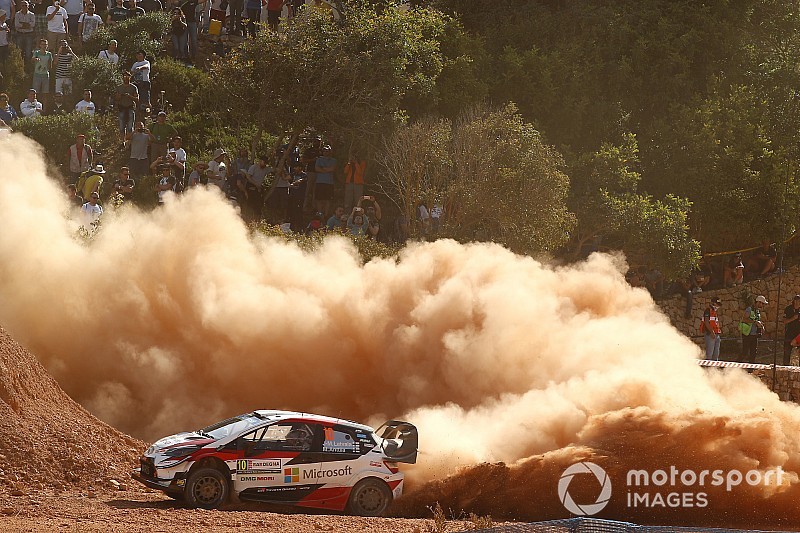 Ogier headed into Friday as rally leader courtesy of his stage win on Thursday’s superspecial stage, but fell to ninth as he fought against the conditions as the opening car on the road.

But Ogier’s morning would get worse on the Monte Barante stage that concluded the loop. On the quarry section where the stage began, the Citroen driver clipped a boulder on the inside of a left-hander, immediately breaking the steering on his C3 WRC.

Upfront, it was Teemu Suninen who made a flying start to the morning, dominating the early Tula test to edge teammate Elfyn Evans by 4.8s and thus establishing an early one-two for M-Sport.

Evans dropped 7s on the following Castelsardo stage of the morning as “something was not quite right with the braking”, but Suninen maintained his form with another stage win over Latvala who moved into second.

Suninen would lose the lead on Tergu-Osilo though, spinning his M-Sport Fiesta early on the test. He lost 15.1s to stage winner Tanak and dropped behind Latvala into second.

Latvala suffered a stall on Motne Baranta, but maintained his lead over Tanak who finds himself second, despite describing the feeling on the stages as “like a cow on slippy ice”.

Hyundai’s Dani Sordo “didn’t understand” how he picked up a slow rear-left puncture on the Tula stage, but recovered to set the third fastest stage times on the following three tests to lie a mere 3.5s away from Latvala in third.

Thierry Neuville opted for an adverse tyre strategy to the majority of his rivals, selecting six mediums for the morning loop whereas most of his rivals chose five or six hards.

He was left to rue his choice, but is only 14.1s back from Latvala in sixth.

Unlike Neuville, he had two hard tyres in the boot which he bolted onto his i20 for the final two stages of the loop. Ultimately this made little difference, and he ended Friday morning in seventh.

Toyota’s Kris Meeke has only competed in Sardinia twice in the last four years, feeling frustrated after stage three Castelsardo after doing “as much as I can do with the experience I have”. He stalled at a hairpin on stage five to end the morning eighth, 19.1s shy of the lead.

Both Citroens ran into trouble on Friday morning, as Esapekka Lappi’s difficult season continued in Sardinia. Lappi was sixth after stage three but dropped 38.3s on Tergu-Osilo after touching a bank and pushing his rear-left tyre off the rim.

Juho Hanninen is contesting Rally Italy in a fourth Yaris WRC in a bid to test various parts for Toyota. He completes the top 10, 5.3s behind Lappi.