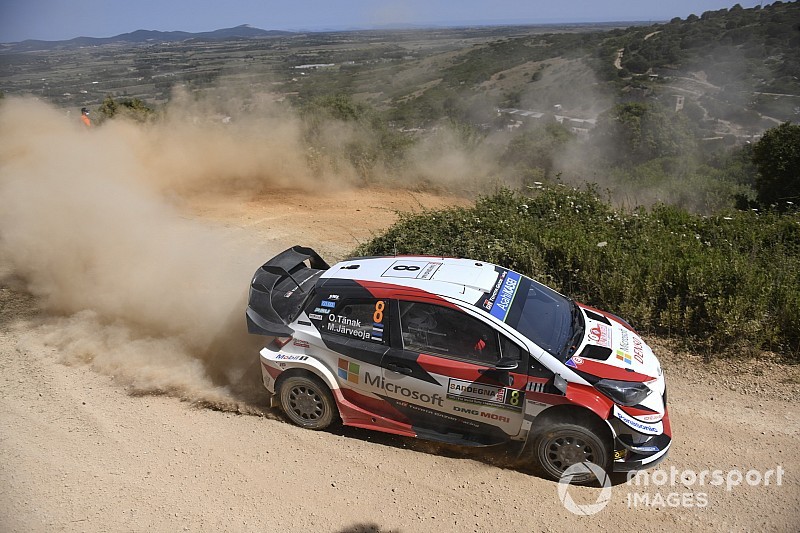 Tanak selected a different tyre strategy to his immediate rivals Sordo and Teemu Suninen, who both chose five hard compound tyres for the loop. Tanak went with three mediums and two hards, a combination he used on this exact loop two years when he won the rally for M-Sport.

The Toyota’s speed was ominous on the opening Coiluna-Loelle test, as Tanak immediately grabbed 6.5 seconds from Sordo and 7s from Suninen to vault into second, cutting Sordo’s lead from 10.8s to 4.7s.

Sordo limited the damage on Monti di Ala, losing 2.1s despite clipping a bank with the rear-left of his Hyundai towards the end of the test.

Tanak then stalled his Toyota on a Monte Lerno hairpin, but despite this, managed to beat Sordo by 9s to take the rally lead by 6.4s.

Suninen struggled to keep pace with Sordo and Tanak ahead, but has a firm grip on third place, 27.1s behind the leader.

Hyundai’s Andreas Mikkelsen and M-Sport’s Elfyn Evans started Saturday fourth and fifth but separated by a whisker; the position in Mikkelsen’s possession by 0.1s.

Evans made his move immediately, edging Mikkelsen by 0.3s on Coiluna-Loelle to head his rival by 0.2s. But Mikkelsen snatched the place back on Monti di Ala, beating Evans by 0.9s to head to Monte Lerno 1.1s to the good.

But Mikkelsen would make a mistake on Monte Lerno, hitting a gate on the exit of a water splash to drop back to fifth, 2.6s behind Evans overall.

The pair are losing touch with the podium though, such has been the ferocity out front. Beginning the loop 9s back, Evans is now 27.9s behind teammate Suninen in third.

Toyota driver Kris Meeke began Saturday 9.2s shy of the Mikkelsen and Evans squabble, and set some comparable times throughout the morning. But he is now 10.8s behind the duo, although 51.9s ahead of Thierry Neuville.

Neither Neuville nor Esapekka Lappi managed to make any significant headway into those ahead of them. Neuville holds seventh for Hyundai, bemoaning “another wrong tyre choice”, with a 20.1s advantage over Lappi’s Citroen.

Sebastien Ogier returned to action after retiring late on Friday morning when he clipped a boulder in his Citroen C3. He was due to run first on the road but incurred penalties to drop down the start order, slotting in behind championship rival Tanak.

The world champion was quickest in the early splits, but his torrid weekend continued on the second stage of the loop when he damaged the rear-left suspension of his Citroen C3 and was forced to stop and repair it.  After patching his car up, Ogier completed the loop but only at a crawl.

Jari-Matti Latvala was promoted into the position of road sweeper courtesy of Ogier’s tactics. Like Ogier, Latvala is well outside the points after he was forced to retire on Friday’s final stage when his Toyota slipped off the outside of a narrow left hander.

Hybrid World Rally Cars to be introduced for 2022