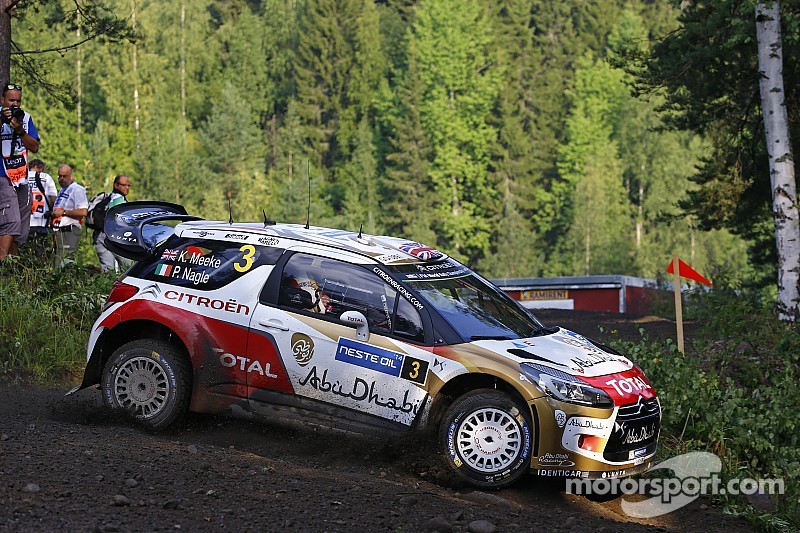 Kris Meeke and Paul Nagle moved into second position in the overall standings at Rally Finland during today’s long leg.

After a long prologue over close to sixty kilometres yesterday, today’s leg featured nine stages in total. The crews set off in the same order as the World Championship standings.

Lying third as the action got underway this morning, Kris Meeke set off at the same pace as on day one. After a stage win on Kakaristo 1 (SS7) and an impressive series of performances, he managed to move ahead of Sébastien Ogier into second place, whilst remaining in touch with the overall leader, Jari-Matti Latvala.

Meanwhile, Mads Østberg first of all got the better of Juho Hänninen in the morning, before entering into a three-way scrap for fourth. He ended the day fifth overall, just 1.2 seconds adrift of fourth-placed Andreas Mikkelsen but ahead of Mikko Hirvonen in sixth.

In the WRC2, Sébastien Chardonnet and Thibault De la Haye recorded the first stage win of a Citroën DS3 R5 in the category, returning to Jyväskylä this evening in third place.

Leader since the start of the rally, Martin Koci controlled from the front in the Junior WRC. Simone Tempestini and Quentin Giordano completed the top three of Citroën DS3 R3s.

Saturday’s leg features ten stages, over 130 kilometres, on some of Rally Finland’s best-known roads. The cars are due to leave parc ferme at 7.00am, returning to the service park at 1.57pm and concluding the leg at 9.51pm.

Kris Meeke: “I’m very happy to end the day in second position. This morning, I didn’t know if I would be able to keep up the same pace on new roads and with new pace notes. I have to say that things went really very well, since we managed to get past the World Champion and the winner of last year’s Rally Finland. Having said that, I’m still very focused, because it’s not finished yet!”

Mads Østberg: “I tried to start from scratch, to get back on the pace this morning. It worked very well. I must admit it’s a lot more fun to have a specific target on this kind of rally. We’re fighting for fourth with Andreas Mikkelsen and Mikko Hirvonen. Tomorrow, we’ll have to push from the word go and just got for it, no questions asked. Last year, I set some good times on these stages, so that augurs well…”

Marek Nawarecki (Citroën Racing Deputy Team Principal): “Kris has had a remarkable day. His aim was to stay in touch with the leaders. But he has done even better than that in getting past Sébastien Ogier. His incredibly consistent speed and his efficient driving show that he is capable of making the most of his potential. As for Mads, he gradually upped his pace without panicking. He is in confident mood now and has got himself into a real scrap for fourth position. There is still a long way to go in the rally. Anything can happen!”