“I’ve never witnessed conditions like these at a rally."

Only four stages remained on today’s leg before the competitors reached the end of this 82nd running of the Rallye Monte-Carlo. But they weren’t just any old stages: two successive runs, at day and then at night, on La Bollène Vésubie – Moulinet, via the Col de Turini, and Sospel – Breil sur Roya!

With a huge amount of water on the roads and plenty of snow at the top of the Col de Turini, the first run provided the drivers with a genuine test of guts and bravery. Third and fourth respectively, Kris Meeke and Mads Østberg consolidated their positions.

After dark and with the snowfall getting heavier, the organisers decided to cancel the second run on the Col de Turini. The Power Stage, held in heavy rain and fairly dense fog, enabled Kris Meeke to pick up an extra point. Kris finished third overall in the final standings to become the first British driver since 2003 to finish on the podium at the Rallye Monte-Carlo… Colin McRae and Derek Ringer had finished second back then, also in a Citroën! Mads Østberg and Jonas Andersson made a successful debut in their Citroën DS3 WRC, ending the rally in fourth position. 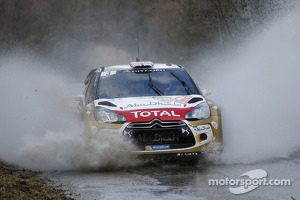 Kris Meeke: “I’ve never witnessed conditions like these at a rally. It was incredibly difficult, but we achieved our goal. I had a very good feeling in the Citroën DS3 WRC. Monte-Carlo is always a tough rally. It’s not really a tarmac rally and it’s a snow rally either. It’s got a bit of everything! I’m very pleased for those who put their faith in me. It’s really nice to be able to pay back the team for their support with this result.”

Mads Østberg: “This fourth position feels like a small victory! I must thank the fantastic team that helped us achieve this result. We made some minor mistakes but the conditions were especially difficult. I know we could have been quicker on some of the stages, but we had to make sure of our position so we didn’t take any unnecessary risks. Bring on the snow at Rally Sweden!”

Yves Matton (Citroën Racing Team Principal): “We asked our crews not to take any risks when the conditions were difficult… and we pretty much only had difficult conditions! They raced sensibly and followed the instructions we gave them, pushing when they felt confident. This performance is a great way to start the season, and highly motivating for the entire team. We all know about Kris’s speed. This weekend, he showed his maturity and his ability to manage a result. It’s an important stage in building the foundations of the rest of the season. Mads is not really a tarmac driver. However, he felt confident in the Citroën DS3 WRC straightaway. During the shakedown, he said that he had really enjoyed driving on this surface for the first time. He then went on to set some very good times.”

SS13 – Sospel – Breil sur Roya 1 (16.55km) – Kris Meeke almost won his first stage of the season, but Sébastien Ogier proved to be quicker. In the rain, Mads Østberg held his position with another sixth fastest time.

SS14 – La Bollène Vésubie – Moulinet 2 (23,40 km) – First on the road, Jaroslav Melicharek went off on a snow-covered section and blocked the road for the other competitors. In the time it took to get him away again, the organisers decided to cancel this stage.

How to build a budget Formula 1 car