Kubica shows his class on Monte-Carlo

It would be difficult to find a more daunting debut (*) with a new team and a new car than Rallye Monte-Carlo, but that didn’t stand in the way of Robert Kubica on the event’s first day of competition. Having led the rally in its early phases, the Polish driver currently holds third place behind the wheel of his RK M-Sport World Rally Team Ford Fiesta RS WRC – an incredible achievement given the challenging nature of his maiden outing with the M-Sport team. 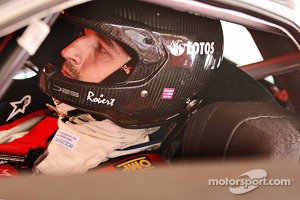 Kubica and co-driver Maciej Szczepaniak were the ones to beat over the opening stages – two fastest times propelling them into a 36.8 second lead over reigning champion Sebastien Ogier. Unfortunately, the duo fell foul to the same fate as a number of crews through the first pass of ‘Monteauban sur l’Ouveze – Laborel’ (SS3) – caught-out by the unpredictable forecasts and sudden snow fall.

Cladding his Ford Fiesta RS WRC with Michelin’s supersoft Pilot Sport tyre, the Formula One race winner had to contend with a snow-covered eight kilometre decent through the morning’s third stage – losing over a minute to those on the optimum tyre and dropping him to fourth place overall.

Regrouping brilliantly, Kubica was back on the pace through the afternoon loop. Setting a string of competitive stage times, he and Szczepaniak climbed back into a podium position, just 40 seconds shy of the lead.

With two days of rallying left to run and more treacherous weather bands on the horizon, there is still all to play for. The Polish driver has certainly shown his class through today’s difficult stages and will be a firm favourite for a top result as the event continues.

Robert Kubica (3rd): “I’m pretty pleased with our performance today. At the beginning of the year I set myself a target to win at least one stage throughout the season, and I have already achieved that in the first two! We still have a lot to learn and there is a long way to go in this event, but I think we have had a good day.

“Of course when you are leading after two stages and then get caught-out by a lot of snow in the next, it’s always painful, but I also have to be realistic. If someone had told me before the event that I would be in this position, I would have taken it straight away. It could have been better, but honestly I think we have to be very satisfied with the job we have done today.

“I nearly opted for spare snow tyres this morning, but when we didn’t expect snow – like a lot of other drivers – I thought that there was no reason [to do so]. Unfortunately for us, it turns out that there was a reason!

“Tomorrow will be another tough day with some really long stages – maybe the toughest day of the event – so I hope that we can keep up our good form and make it down to Monaco with no problems and all four wheels still on the car.”

Team Principal, Malcolm Wilson OBE: “It was an absolutely spectacular performance by Robert [Kubica] through the first two stages. Considering that a number of drivers were on the same super soft tyres, his lead of over half a minute was fantastic to see.

“However the thing that impressed me most was the way in which he managed to come to terms with the fact that he was inevitably going to lose time through the third stage. He knew the reason for it, he kept calm, and he made it through unscathed.

“He took a really sensible approach through the afternoon – consolidating his position – and now he’s in a really strong position going into the final two days.”

(*) Kubica officially started Rallye Monte-Carlo in 2010, but a technical issue meant that he did not make the start of the first stage.