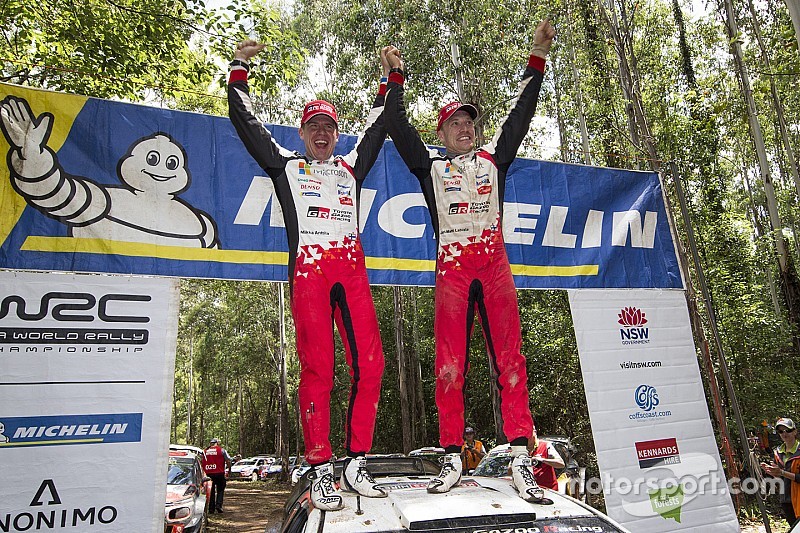 Toyota driver Latvala went into the final loop of the season knowing that he'd probably have to concede his lead to Tanak as part of the title showdown with Ogier, but dramas for the Estonian on the penultimate stage opened the door for the Finn to take his first Rally Australia victory.

It also secured the title for Ogier, with Thierry Neuville having already crashed out on the first stage of the loop.

Having reclaimed the lead from his teammate through this morning's loop, Latvala kept his charge going by out-pacing Tanak on the Coramba test by just over a second.

The Sapphire stage was then set to determine how Toyota would play its team orders, with hopes that the wet, slippery conditions may catch Ogier out and give Tanak a sniff at the title.

However it was Tanak that was ultimately caught out, his Yaris left stranded with a transmission issue caused by contact with a tree.

That left Latvala free to win the event, and well-placed to do so thanks to a 32s lead over Hayden Paddon.

All he had to do was get through the Wedding Bells Power Stage, the same bit of road that took him out of third place in dramatic fashion 12 months ago.

There was no repeat this time around, though, Latvala happy to go through the final test just fifth fastest to secure a victory that also sealed the manufacturers' title for Toyota.

Paddon finished on the Rally Australia podium for the second year in a row, unable to take the fight to Latvala on the final loop but comfortably second-best thanks to a straightforward afternoon.

Behind the Kiwi it was Friday pacesetter Mads Ostberg in third, the Citroen driver benefiting from Tanak's retirement to end up on the bottom step of the podium despite damaging the rear of his car on the Sapphire stage.

Ogier, meanwhile, claimed his sixth title with a subdued run through the final loop.

Knowing that sixth or better was enough to deny Tanak, and with Neuville crashing out before Ogier even started the first stage of the afternoon, the Frenchman could afford to tip-toe through the slippery conditions.

It wasn't until the Power Stage – and with the title done and dusted – that Ogier dared to really let rip, topping a forest stage for the first time all weekend on his way to fifth overall behind Esapekka Lappi.

The final loop was consistent with Ogier's entire Rally Australia weekend, the M-Sport star having gone into conservative mode from the final forest stage on Friday onwards.

It was at that point that Neuville was effectively taken out of the running by a puncture, while M-Sport teammates Elfyn Evans and Teemu Suninen let Ogier through to put him in that crucial sixth spot that would always have denied Tanak.

From there it was about holding position and cruising to the title.

"The season was so intense and actually [the title] just happened in between two stages, it is a mixed feeling at this moment," said Ogier.

"I'm proud of what I have achieved and my team, they are the best. It has been an amazing journey together and now I just enjoyed the last push in this car. I hope I will not miss it."

Neuville's season came to a disappointing end very early in the final loop, the Belgian crashing out on the Coramba test. With patchy rain leaving parts of the stage remarkably slippery, a pair of half-spins saw Neuville clip a bank, and then a tree.

The second impact tore the left-rear wheel from the Hyundai, Neuville limping to a run-off area to retire the car.

While that was the official end of his title bid, he was on the back foot well before that. The Belgian's hopes were left in tatters by his dramas through the Sherwood test on Friday afternoon, which not only left him more than a minute off rally lead, but meant he was forced to run first on the road for Saturday.

Overhauling Suninen on Saturday afternoon was as much of a recovery as Neuville had mustered, and when he crashed he was sitting back in eighth place, which wouldn't have been enough to outscore Ogier.

That means both he and Hyundai come away from the season empty handed in terms of titles.

Evans finished up sixth, while Craig Breen, whose action-packed rally started with hitting a tree stump on Friday and ended with a spin on the Power Stage, finished seventh.

Suninen had been on for seventh place, but after clipping a tree during the Sapphire stage the team opted not to run his car through the Power Stage.