As the FIA WRC Academy embarks on the season finale at the RACC Rally de España next week, there is still much to fight for.

With four drivers in the running for the final podium positions and the Co-drivers’ Championship still up for grabs, the WRC Academy is once again poised to provide some of the most intense and close-fought rallying in the field.

As the only true ‘mixed-surface’ event on the calendar, Rally de España will see the crews put all they have learn into practice as they combine the art of gravel rallying with the precise lines and technique required for competition on asphalt.

With the gravel stages on the first day of competition interspersed with sections of Tarmac, the crews will have to have their wits about them as they strive to keep their pace and rhythm amidst continuous changes of grip and driving style. 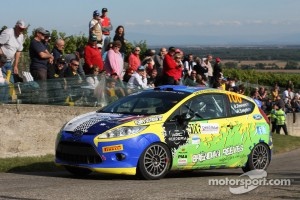 As the rally moves to the hills north of Tarragona, the challenges of dual surface rallying are replaced by wide circuit-like roads that pose a challenge in themselves.

With the wide roads and flowing corners demanding expert precision, the prospect of rain could also make the Tarmac treacherously slippery.

After securing the title on the previous asphalt outing in France last month, Elfyn Evans will be free from pressure and keen to prove his pace once more. The Welshman will have a new co-driver next week in the form of former WRC Academy competitor Sebastian Marshall.

The duo are currently competing behind the wheel of an M-Sport prepared Ford Fiesta R1 at the Rallye du Condroz-Huy in Belgium to perfect their partnership and gain extra seat time ahead of the final round in Spain.

One of four drivers gunning for the runner-up spot, Brendan Reeves returns to Europe hungry for his first victory as part of the WRC Academy.

The Australian’s sister and co-driver, Rhianon Smyth, is also a firm favourite to take the co-drivers’ crown – a feat which would make her the first woman in history to secure an official WRC championship (other than the WRC Ladies’ Cup which ran from 1990-1995).

Since the previous round in France, the pairing have been competing in their homeland and will boast 40 supporter names on the bonnet of their Ford Fiesta R2.

Embarking on his home-event, Jose Suárez is another favourite for the runner-up spot and his first WRC Academy victory in front of his home crowd.

With the smooth circuit-like asphalt suiting the Spaniard’s driving style – and an improved performance on gravel – Suárez will be one to watch throughout the two-day event.

Co-driver Candido Carrera will also be hoping home advantage pays dividends as he fights for glory in the Co-drivers’ Championship.

As one of the most impressive new-comers to the WRC Academy, Pontus Tidemand is also capable of claiming the runner-up spot next week.

With two podiums to his name and an ever-improving performance on Tarmac, the Swede will be aiming for another strong result as he chases second place and navigator Stig Rune Skjærmoen seeks the coveted Co-drivers’ Championship.

Preparing for the season finale, Tidemand drove a Ford Fiesta RS WRC at the 2013 Swedish Rally Championship preview in Stockholm and strengthened his fighting spirit by contesting the NGK Masters Scrap-car race in his native Sweden.

Also in contention for the runner-up spot, John MacCrone will be looking to build upon his impressive performance on asphalt this year. With two podiums from two Tarmac events, the Scot will be looking to do one better next weekend.

Navigator Stuart Loudon is also in the hunt for the co-driver laurels and will be preparing by swapping the pacenotes for the pedals as he contests his second rally behind the wheel on the final round of the Scottish Tarmac Championship at Crail this weekend.

Looking for his first and long-awaited podium of the season, Timo Van der Marel is another driver looking to impress next week.

Partnered by experienced co-driver Erwin Berkhof, the Dutch driver has been tantalisingly close to the podium on numerous occasions this season and will be looking to make his presence known as the WRC Academy embarks on the season finale in Spain.

Fredik Åhlin will be hoping to end his season on a high next weekend. Since France, the Swede has been continuing his work as an instructor for Audi Driving Experience and will be aiming for his first podium finish of the year.

Åhlin and co-driver Morten Erik Abrahmansen were hoping to complete a gravel test ahead of the Spanish event, but as the Scandinavian winter came in early this year, the duo have been working on their fitness and ensuring that they are mentally prepared for the challenges ahead instead.

Making his debut in the WRC Academy, Aron Domżała and co-driver Kacper Pietrusiński will be hoping for a good finish on their maiden WRC event next week.

Using the rally to compare his speed against some of the most impressive young talents in the sport, the Pole will gain a wealth of experience as he looks into the potential of competing on the world stage in 2013.

Fresh from competing on the asphalt roads of the Po 22 Rajdzie Dolnośląskim in Poland, the youngster is relishing his maiden drive in the WRC.

Brendan Reeves said: “We have a little bit of experience from rallying in Spain – we were here for the Pirelli Star Driver programme in 2010 and we did a pre-Portugal test in the north of Spain earlier this year.

But when it comes to the stages, this event will be completely new to us.

“The dual surface will certainly be a challenge. We’ll do the Academy test on gravel which will prepare us for the first day, and we are coming off the back of two Tarmac rounds so hopefully the feeling will still be pretty fresh for the second day.

“The first day will have the odd section of Tarmac, but for us it will be less about set-up and more about preserving the tyres.

You can get a lot of oversteer driving gravel tyres on Tarmac sections – and the stages seem to be quite twisty – so you have to be careful not to completely destroy the rubber.

“I am really looking forward to the battle for second place. Jose [Suárez] will be hard to beat on his home event, but we want to win and second in the championship is our goal.”

Jose Suárez said: “I am looking forward to competing at my home event and our goal will be to get second place in the championship. Of course if I can win, I will push for it, but second place overall is our main aim next week.

“Having both gravel and Tarmac on the same event will be hard. You must protect the tyres as there could be a lot of wear, but we will all have to face this challenge.

“I am looking forward to the second day of competition as this sort of smooth Tarmac is my favourite type of rallying. I will want to go flat out when we get to the Tarmac stages, but I must keep my head.

Candido [Carerra, co-driver] is always telling me to keep it calm and I will need to listen to him on this event as we really want to finish second in the championship.”