M-Sport achieve the impossible and raise the “Titänak” 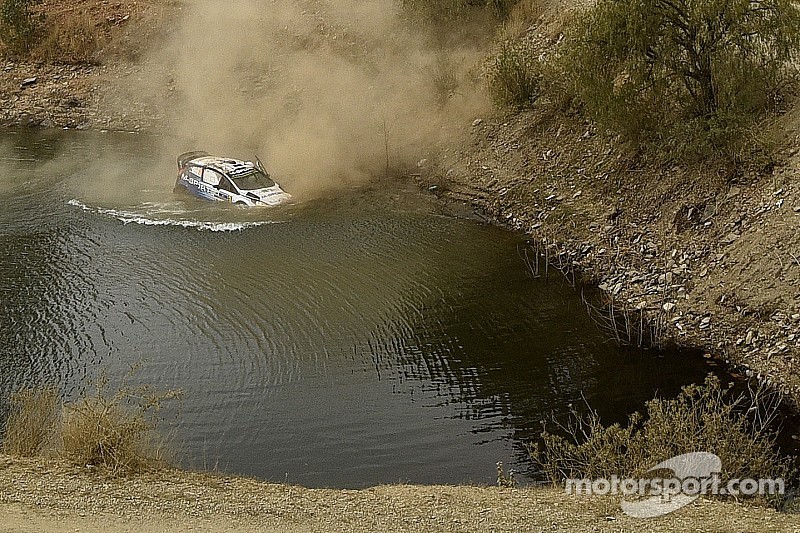 M-Sport World Rally Team’s Elfyn Evans is holding a strong fifth place after the most dramatic opening day the FIA World Rally Championship has seen for a number of years. Unfortunately, Ott Tänak became one of Rally Mexico’s numerous victims, but the M-Sport team achieved the impossible – repairing a seemingly unsalvageable rally car to get it ready for tomorrow’s stages.

In the day’s most terrifying off, the Estonian’s Ford Fiesta RS WRC became submerged in a reservoir. Caught out under braking over a compression in the road, Tänak damaged the front-right suspension of his Ecoboost-powered Fiesta, 2.6 kilometres into the first stage of the morning (SS3, Los Mexicanos 1, 9.91 km). Unable to make the following left-hand corner, he and co-driver Raigo Mõlder were forced into a roll down the steep embankment – coming to a stop in the deep water.

The car has been gone all day, submerged at the bottom of a lake, full of water, and the team had to do a full rebuild in just three hours!

Thankfully both driver and co-driver were unhurt in the incident, and were determined to continue the event. Showing true professionalism and determination, Mõlder even rescued his pacenotes from the watery depths – heading straight back to the hotel to dry what are one of a rally driver and co-driver’s most precious pieces of equipment.

The team were determined to see the crew back on the stages. Despite the car being completely submerged for almost 10 hours, M-Sport’s technicians were prepared to work throughout the night in an effort to repair the Fiesta, and repair it they did – with the help of both Tänak and Mõlder who stayed by their team’s side until the work was complete.

This is an extremely difficult event and as we saw from all of the drama today,

Completing the work in just three hours, it was an outstanding job by the technicians who have once again proven themselves to be in a true class of their own. To complete this epic story, the number six Fiesta RS WRC was driven into parc fermé by Tänak and Mõlder.

In the sister Fiesta RS WRC, Evans and co-driver Daniel Barritt were showing the same intelligence which propelled them into an impressive fourth place this time last year.

The Welshman struggled to find his rhythm due to the inconsistent grip levels, but opted for a cautious approach which paid dividends. Managing his pace when necessary, Evans also showed encouraging flashes of speed – setting the third fastest time on the first pass of El Chocolate (SS4, 44.13 km) along with the fastest time through split section six.

Keen to show further development tomorrow, the British pairing will look to continue their intelligent approach – upping the speed as their confidence builds.

Ott Tänak (29th) said: “This is something that we have never seen before. The car has been gone all day, submerged at the bottom of a lake, full of water, and the team had to do a full rebuild in just three hours!

“It was a crazy challenge, but I knew the M-Sport guys would be up for it. I have massive respect for my team. This was a huge task to do, but they have worked as hard as they always do and I am so grateful to each and every one of them.

“To get back out on the stages tomorrow is very important for me and Raigo [Mõlder, co-driver]. We need to rebuild our confidence and get back behind the wheel, and my team have made that happen this evening.”

Elfyn Evans (5th) said: “This is an extremely difficult event and as we saw from all of the drama today, it is something of an achievement just being here at the end of the day! It’s so important to build the confidence and get through the first day here.

“It’s been a bit up and down for us. In places I felt that we could have done better, but in others I think we drove well with some good times. Tomorrow is another challenging day, but I hope that we can build on what we did today and deliver some more speed.”

Team Principal, Malcolm Wilson OBE, said: “After what happened to Ott [Tänak] and Raigo [Mõlder] today, it was just a huge relief for the entire team to see that they were both okay. For me, it was important to get them back out on the stages and that was exactly what they wanted to do. There was no deliberation, and that shows a real determination.

“The job that our technicians did to get the car fixed was nothing short of phenomenal. There were a lot of people in the service park who didn’t think it could be done, but I knew that they would be more than worthy of the challenge.

“They are a true credit to this team and I am sure that their loyalty and respect for Ott and Raigo also spurred them on – the crew staying by their side until the work was complete.

“Elfyn [Evans] has had a very sensible day. He’s kept out of trouble and still shown some impressive pace when he felt comfortable – setting a strong time on SS4 and a fastest split which is really encouraging.

“If he can keep it clean and tidy tomorrow then he will be on course for a strong result and will secure more valuable experience.”

Yurii Protasov (1st WRC 2) said: “I am very happy. We have a great feeling with the car. After driving the Fiesta RS WRC, I feel that I understand everything so much more. Everything is working perfectly. I feel strong, Pavlo [Cherepin, co-driver] feels strong, and together we have the power!”

Nicolas Fuchs (3rd WRC 2) said: “It’s a difficult rally. Last year I stopped in the El Chocolate stage so I told myself that this year I have to finish the first day and I think we have done that in a really strong position. Yurii [Protasov] and Nasser [Al-Attiyah] will be very strong, but tomorrow I am ready for the fight!”

Abdulaziz Al-Kuwari (5th WRC 2) said: “It was a very difficult day with lots of drama and lots of retirements. Tomorrow will be the longest day, but I think those stages will suit me better.

“We’re fifth overall. Okay, it’s not the position we came here for but with eight months away from the WRC I think it will take a while to get the confidence back. Still I think that we have driven well and we are only 30 seconds adrift of fourth so we will push for that and hopefully it will be a better day for us tomorrow.”