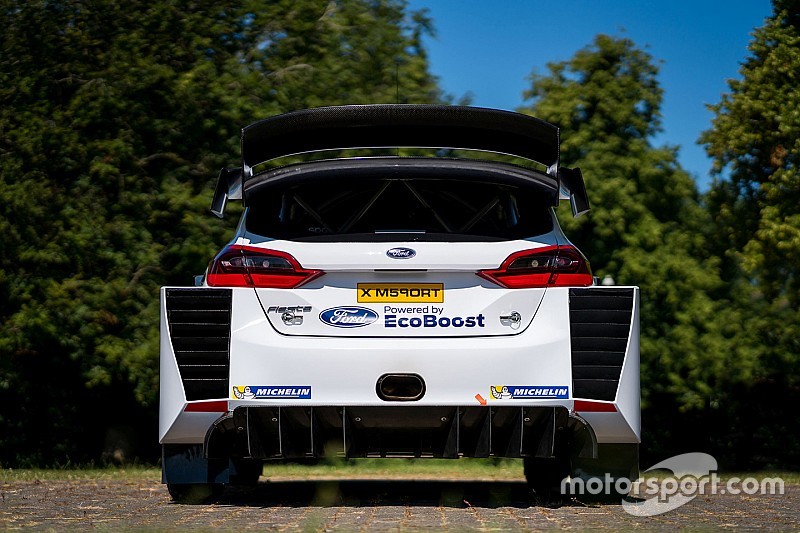 M-Sport has confirmed it will run a revised rear aerodynamic set-up on its Ford Fiesta WRC at this week’s Rally Finland – but only for Sebastien Ogier.

The new rear wing and bumper, crafted at Ford’s motorsport development centre in Charlotte earlier this season, were tested extensively in Finland earlier this month.

M-Sport's original intention had been for all three factory cars to run the update, but Motorsport.com understands a combination of wing damage and lack of availability of parts has made that impossible.

The update is expected to be delivered to all the works cars in time for next month’s Rally Germany.

Team principal Malcolm Wilson explained: “It’s been a long break [since Rally Italy] but the hard work hasn’t stopped and the team have been working around the clock to ensure that we had the new aero ready for Finland.

"It’s just on the one car for the moment, but we’re confident that it will give Sebastien and Julien that little bit extra.”

Ogier outlined the benefits of the new rear wing when he spoke to Motorsport.com following his test earlier this month.

“It’s more stability at the rear and it gives you more potential [set-up opportunities] with the rear of the car," he said.

"The disadvantage is that the nose is a little bit higher over the jumps – this happens when you have the aero mainly in the rear. But it’s manageable by the drivers.

"At the start of the test I was flying more like this [with the front of the car high and landing on the rear wheels] to try it. I know how to handle the jumps with the aero.

“We hope it will give us that little bit extra in terms of performance, but we’ll still have to get absolutely everything right over the course of the weekend if we want to be in the fight for the top results.”

Ogier's teammate Elfyn Evans, who finished second in Finland last year, tested the new rear aero, but only on smaller roads where the effect would be less pronounced.