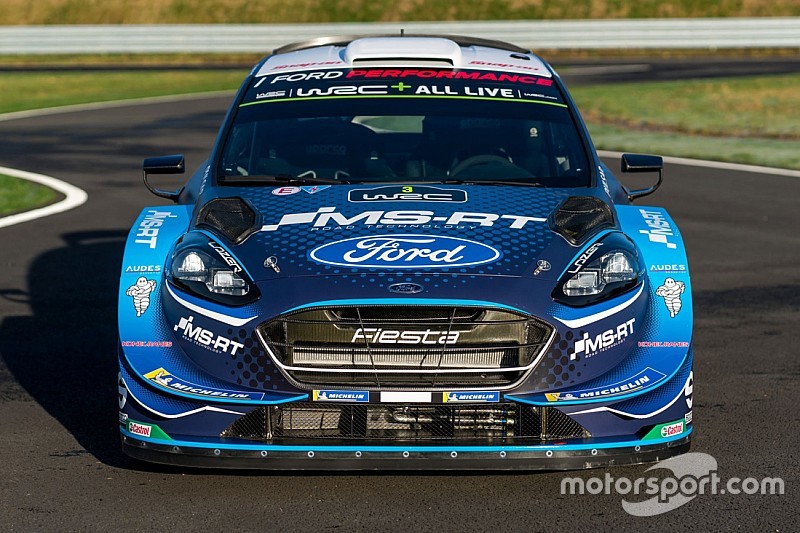 The M-Sport Ford World Rally Championship outfit has revealed its new livery for the 2019 season.

M-Sport cars carried Red Bull liveries for the past two seasons after the squad signed and subsequently retained Sebastien Ogier for the 2017 and '18 seasons.

But Ogier, who claimed his fifth and sixth WRC drivers' titles while at the Cumbrian squad, has joined Citroen for 2019, which initially cast uncertainty over M-Sport's programme.

M-Sport announced its commitment to the series last month, and has now unveiled a revised livery for 2019.

The Ford Fiesta WRCs that will be driven full-time by Teemu Suninen and Elfyn Evans will run in a "nitrous blue" scheme that the team last used in 2016, while the design also incorporates an outline of the M-Sport Evaluation Centre that is due to open next month.

Prominent branding from Ford - which has provided M-Sport long-standing support - is also visible.

The three other WRC manufacturers - Toyota, Hyundai and Citroen - are expected to reveal their liveries on Saturday as part of the 2019 WRC season launch at Autosport International in Birmingham.

“Next year is going to be an important year for M-Sport, and that is reflected in this new livery," said M-Sport managing director Malcolm Wilson.

"We have a number of new projects coming up, including the launch of our Evaluation Centre and it’s fantastic to see the test track proudly displayed on our Ford Fiesta WRCs – two projects I’m immensely proud of merged together in this eye-catching new design."

As well as running Suninen and Evans full-time, M-Sport will field Pontus Tidemand on the first two rallies of the season and will also give WRC2 frontrunner Gus Greensmith his World Rally Car debut on Rally Portugal.