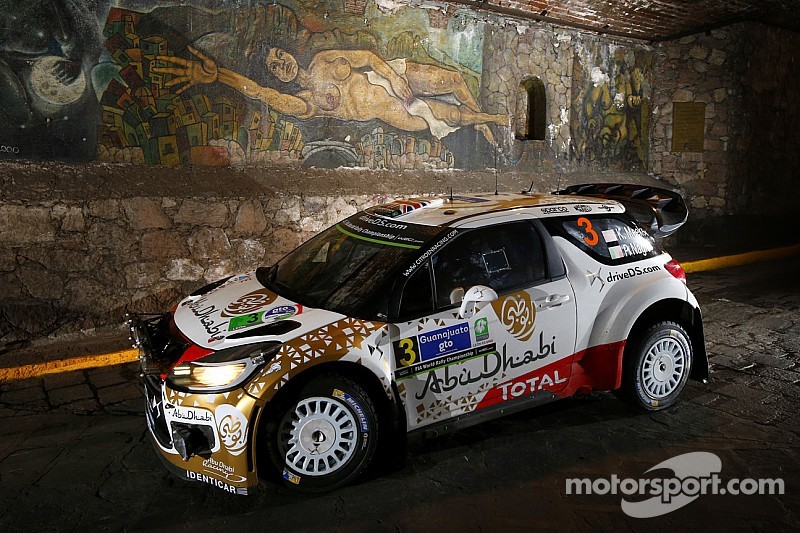 It is the first time the Citroën Total Abu Dhabi World Rally Team has finished on the podium this season.

Mads Østberg and Jonas Andersson still had work to do to achieve their stated aim of a podium finish as they left the León service park this morning in their DS 3 WRC.

Second overnight, the Citroën Total Abu Dhabi World Rally Team driver had to defend his position and hold off his fellow countryman Andreas Mikkelsen, who was only 4.5 seconds behind.

Second place is an excellent result for the debut gravel outing of the 2015-spec DS 3 WRC.

With such a narrow gap, the final leg’s stages promised to provide plenty of excitement. Shortly after 10.00am, the two crews set off on the 55.82 kilometre-long Guanajuatito. To add to the tension, this was the first time that the legendary World Championship test would be contested without the help of split times.

Setting off three minutes after his rival, Mads Østberg drove at a strong pace. He even broke the stage record with a time of 35:26.5 in the DS 3 WRC, improving on his own performance here last year.

On Derramadero, Mads continued to consolidate his position, finishing ahead of Mikkelsen before wrapping up second place at the end of the Power Stage.

Eighteenth overnight after rejoining under Rally 2 rules on Saturday, Kris Meeke’s only aim was to finish the rally for the manufacturers’ championship. The Briton made it to the end to score four additional points for the Citroën Total Abu Dhabi World Rally Team.

Mads Østberg: “I’m pleased to have shown that I was capable of maintaining a very strong pace throughout the rally. Second place is an excellent result for the debut gravel outing of the 2015-spec DS 3 WRC. It will give us confidence for the rest of the season. We have to keep working and build on these foundations to improve further.”

Kris Meeke: “I’m used to working a lot between rallies. I’m probably going to have to take a step back before heading for Argentina. I’ll do a reset to try and give my season a fresh start!”

Marek Nawarecki (Citroën Racing Deputy Team Principal): “The rally ends on a very positive note. The car has proven once again that it is competitive and Mads has shown consistency in managing to keep out of trouble on this tricky Mexican course. We are a bit disappointed with Kris, because he made a mistake at the start of the rally. Overall, the performances were good, although we would have liked to score more points. It nevertheless augurs well for the rest of the season!”