Meeke and Østberg in confident mood in France 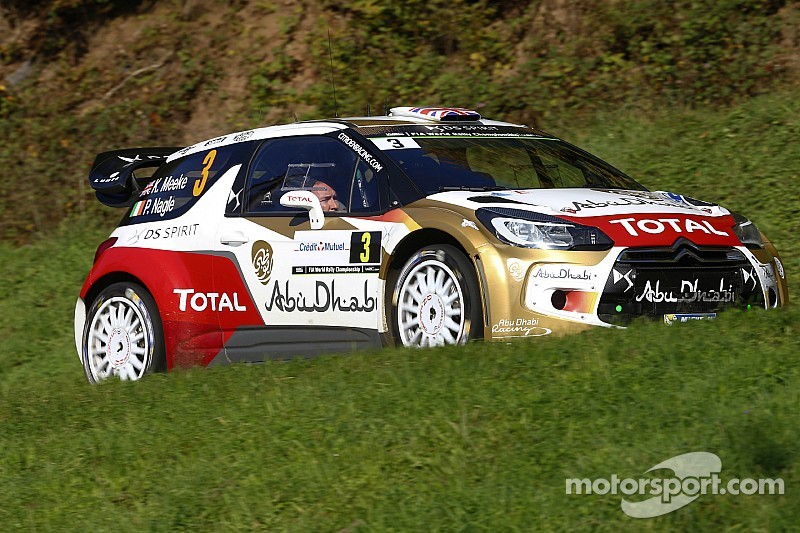 At its home round, the French team enjoyed huge support from local fans, who lined the roads of Alsace and Lorraine in their thousands.

Back on tarmac after a good performance on gravel in Australia, the Citroën Total Abu Dhabi World Rally Team was in impressive form again right from the word go.

After a strong showing in the shakedown, Kris Meeke and Paul Nagle grabbed third place overall after the daunting “Vosges – Pays d’Ormont” stage (SS2). The British driver remain focussed on his initial goal to take full advantage of the qualities of his DS3 WRC. He ended the day in third overall, within fifteen seconds of second place.

Our goal is still to secure second place in the Manufacturers’ World Championship.

In the other DS3 WRC, Mads Østberg and Jonas Andersson were in good spirits throughout the morning. Clearly in confident mood with the new tyres supplied by Michelin, the Nordic crew quickly moved into fifth position, battling to catch tarmac specialist, Dani Sordo.

In the WRC2 category, Sébastien Chardonnet and Thibault De La Haye ended day one in third place in their Citroën DS3 R5, despite picking up a puncture on SS5.

At the end of the first leg, the Briton Alastair Fisher led this fifth round of the FIA Junior WRC, ahead of the Frenchman Quentin Giordano and the Slovakian Martin Koci. Stéphane Lefebvre, the current championship leader, had to settle for fifth place.

Saturday’s leg features seven stages and 125 kilometres of timed sections. An early start awaits the crews. Cars are due to leave parc ferme at 6.30am, returning to Strasbourg at around 8.20pm after two loops of three stages in the Haut-Rhin department, a remote service in Colmar and a super-special stage in Mulhouse.

Kris Meeke: “I’m very pleased with what we were able to show today. As has been the case in the last few rallies, we are in the leading group. It’s important to be in a good position to get as many points as possible at the end. Our goal is still to secure second place in the Manufacturers’ World Championship.”

Mads Østberg: “The day went pretty well, really. I really like the Rallye de France stages. It’s still my favourite tarmac rally. Every kilometre we cover on this surface helps me to improve. We are going to do some more work on the DS3 WRC tonight. I can’t wait to start the second leg!”

Marek Nawarecki (Citroën Racing Deputy Team Principal): “Our crews have enjoyed the performance of the new Michelin tyres. This is an important point, because this is our first experience of the tyres in a competitive setting. It has been good so far. We are very much in line with the objectives we set for this event. Kris is within striking distance of the top two. He produced some fine performances and he is getting better with each rally. Mads is not far behind Dani Sordo. Although he found the handling of the car more difficult in the second loop, he managed to stay focussed throughout today’s leg. He needs to consolidate his position more tomorrow. It’ll be another tough day, with some new sections. But our drivers can feel confident about tackling them.”

Solid start for Kubica in France