Sebastian Ogier was given a massive reception in Monaco for his win in this years Rally.

Triumphant reception in Monaco – the winners of the Rally Monte Carlo, Sébastien Ogier and Julien Ingrassia (France) received their “Monte” trophy in presence of Prince Albert II in front of the steps of the Prince’s Palace in Monaco. The Volkswagen duo recorded an emphatic win at the season opener of the FIA World Rally Championship (FIA) thanks to a sterling display behind the wheel of the Polo R WRC over the 14 special stages of the rally classic. For Volkswagen this was a first triumph at the legendary Rally Monte Carlo. On Sunday fans cheered on their heroes at the podium ceremony in the principality. 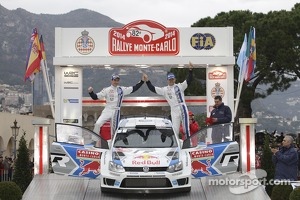 At this year’s “Monte” competitors were once again confronted with extremely challenging weather and road conditions. With rain in the valleys and up to 30 cm of fresh snow on the higher ground, the choice of tyres was often the overriding theme of the world’s oldest rally. Volkswagen completed the classic event with all three Polo R WRC vehicles in the points. Jari-Matti Latvala/Miikka Anttila (FIN/FIN) and Andreas Mikkelsen/Mikko Markkula (NOR/FIN) picked up valuable World Championship points in fifth and seventh places respectively. Latvala and Ogier also took first and second in the final Power Stage to secure further points in the World Championship standings. In the evening the winning duo, along with Volkswagen Motorsport director Jost Capito, will also have the honour of celebrating their victory with Prince Albert and Princess Charlène at the traditional gala dinner.