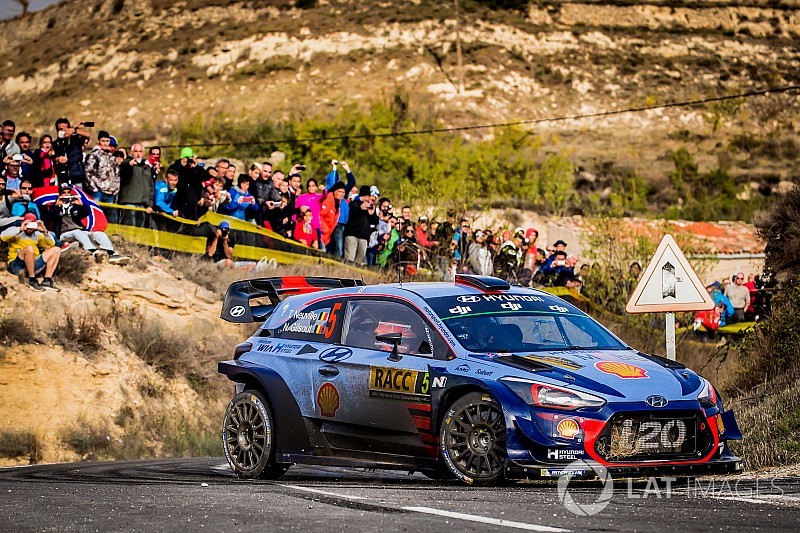 Hyundai driver Thierry Neuville has all but conceded this year’s WRC title to rival Sebastien Ogier.

Neuville lost more ground – and one place in the title race – after a disastrous retirement from Rally Catalunya last week.

A stunning run of six podium finishes, including three wins, was enough to force the Belgian into a mid-season lead, but a downturn in form in Finland followed by two non-finishes after suspension damage in Germany and Spain has cost him dearly.

Now third in the points, 38 down on Ogier and one behind Ogier’s M-Sport teammate Ott Tanak, Neuville is determined to shift his focus away from the championship to trying to regain his form while bringing a brighter end to a season which promised Hyundai so much.

Asked if he thought the title race was over for him, Neuville told WRC.com: “Yeah, OK, that's part of the game. We tried everything to fight back. We had unlucky weekend, with some problems on Saturday. Now it’s finished for us. But that's part of rallying.

“We have seen many ups and downs in the previous years, but it’s like always: we win together and we lose together. We have to look beyond this, continue fighting, look towards the end of the year and finish with some nice results.”

Neuville admitted he was concerned by the number of suspension failures on the i20 Coupe WRC, with teammates Dani Sordo and Andreas Mikkelsen both retiring for the same reason after hitting the same concrete block on the second day of Rally of Spain.

“I don’t know if there’s a weakness,” he said. “My part is to drive the car as fast as I can and give the feedback from there while driving.

"Cars are not made to go through the bushes to hit the mountain, but we have to analyse and to see – if it is that the Ford survived where Dani and Andreas retired, then we have to see why we didn’t.

“We are going to fight hard to find solutions to be more competitive than the others on upcoming events, we have missed part of our success in the past couple of races but definitely we will come back.”

Nandan said: “It’s a very bad weekend. We try all weekend and we ask the driver to do all they can do. It’s true when you try to the maximum you can, you must take some risks – and now we have to take the consequence.

"In the end all three cars stop with the same failure: cutting too much and damaging the suspension.

"But, I have to say it’s difficult not to take any risks. You optimise the road and cut a bit everywhere, sometimes it works, but it didn’t work here. It’s part of the game to take some risks.”

Asked if he was concerned that rival cars had hit the same post in stage 12 without being forced into retirement the way Mikkelsen and Sordo were, Nandan said: "If it's true, we have a big problem with the car. When you hit something you can damage parts.

"Maybe our car is more fragile, but it’s like that and we can’t change anything.”

If suspension issues are identified this week, there won’t be time to implement and potentially homologate an upgrade in time for the final rounds in Britain and Australia.