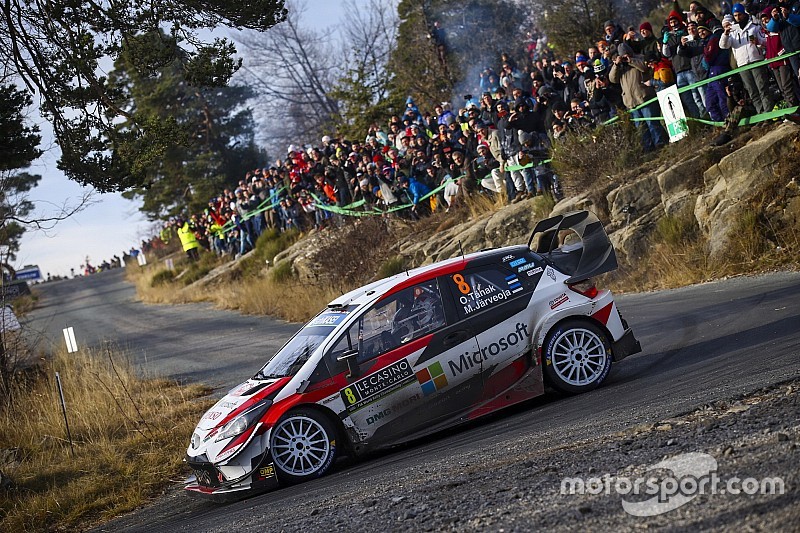 Hyundai driver Neuville finished runner-up to the Citroen C3 of Sebastien Ogier, but Ott Tanak had led the rally on Thursday evening and was third on Friday until he had to change a tyre on a stage.

That dropped Tanak to seventh, more than two and a half minutes off the lead, but the Toyota driver reeled off six-straight stage wins on Saturday and Sunday morning and recovered to finish third.

Speaking about the Japanese manufacturer's pace, Neuville said: "They are dangerous, we said this before, but we see it again here. I hope we have more coming with our car, we are still pushing hard.

"But the speed from Tanak was strong and then Kris [Meeke] on the Power Stage - OK, he saved his tyres all day for this, but he was four seconds faster than anybody and six faster than us. That's a lot."

The nine-time champion said he was surprised by the speed Tanak showed, but pointed to former Citroen teammate Meeke's Power Stage performance as a cause for real concern.

"We know with Tanak and with Toyota what speed they have," Loeb told Motorsport.com, "but the time with Kris in the Power Stage is just incredible."

Meeke won the Power Stage by 3.9 seconds and Toyotas were fastest or joint-fastest on nine of the rally's 16 stages.

Asked to assess his second Monte Carlo Rally podium in a Toyota, Tanak told Motorsport.com: "I am happy. Things didn't go our way on Friday, but we didn't get stressed by it.

"Since Saturday we did a good job: we were 1m30s behind Jari-Matti and Seb [Loeb], but we still managed to get the podium."

Toyota dominated the second half of last season and was consistently talked up as favourite for 2019.

But team principal Tommi Makinen shrugged off talk of dominating the campaign, saying: "We had some good speed here, but there were some technical issues with [wheel] rims.

"This was only our third time here and we came in different conditions this time.