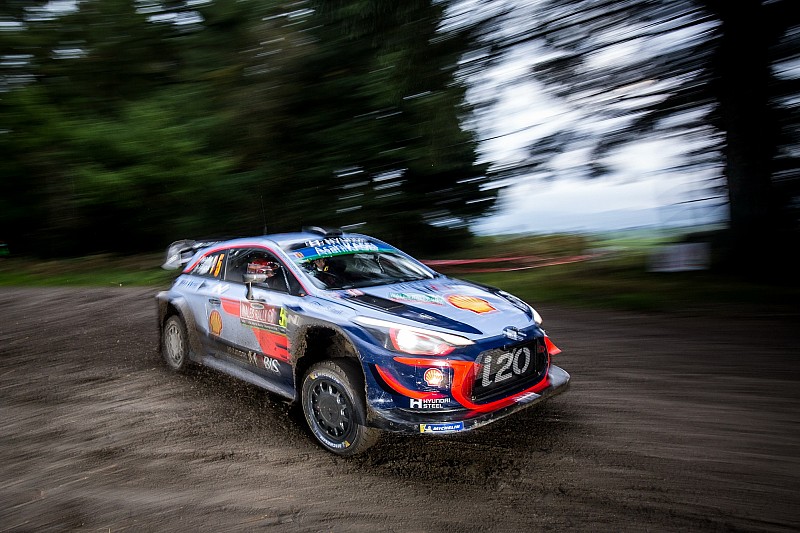 World Rally Championship leader Thierry Neuville dealt his title hopes a blow when he slid off road and into a ditch on the second stage of Saturday’s Rally GB running.

The Hyundai driver began the day second overall, half a minute behind rally leader Ott Tanak, but went off during the final third of the 20km Sweet Lamb Hafren stage.

At the apex of a right-hand sweeping hairpin, he suffered a spike of oversteer and the rear axle of his i20 fell off the road and became stuck in a ditch.

Neuville was fortunate that his error came during a section that was lined with spectators, and he shouted at them to help retrieve the car.

He was pushed out and able to resume and finish the stage. Neuville dismissed the crash, however, saying that perhaps it was overdue.

"At one point it has to come when you're driving on the edge since the beginning of the year," he said.

"It's my first real mistake where I've gone off got stuck since Monte Carlo. It's all part of the game."

Neuville added that the excursion had only caused cosmetic damage to the car.

He now drops to eighth in the overall times, behind teammate Hayden Paddon.

Crucially, he has a 39s deficit to Sebastien Ogier and is 1m22s behind rally leader Tanak – his title rivals.

Neuville entered the rally with a 13-point lead in the standings. But, after his run of four consecutive rally wins, if the result stays the same this weekend then Tanak is set to take the lead of the championship.