Neuville on Corsica win: "I had tears in my eyes" 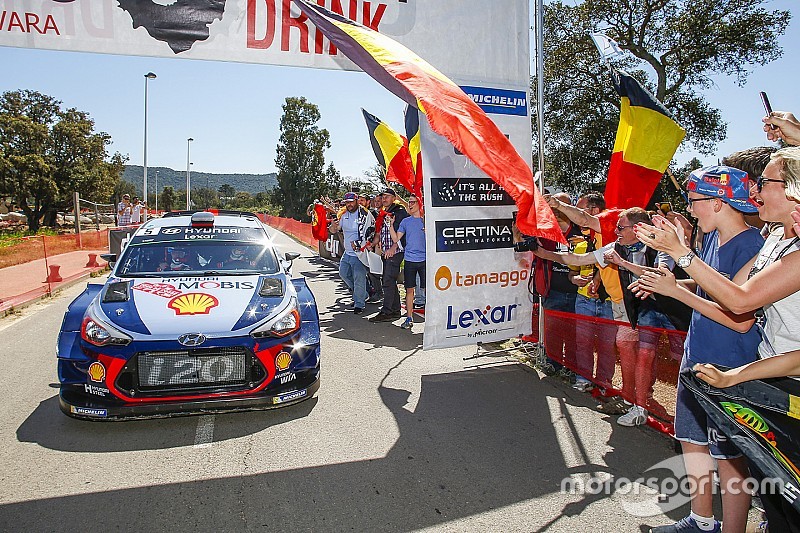 Thierry Neuville has revealed his Tour de Corse win was emotional for him, after he missed out on two victories in dramatic fashion earlier this season.

The Korean firm was the only WRC manufacturer yet to win this season heading to the French round, with Neuville having dominated early on in both Monte Carlo and Sweden only to crash.

Neuville admitted the first four months of the season had been painful.

"We almost won twice, but we didn’t win. The time was long since the beginning of the year," he said.

"We knew the pace was there and we were able to set many fastest stage times and be in the lead for most of the time in the last rallies, but we were not able to score.

"I was quite calm [when leading] because I said to myself that 'it’s happened twice, it cannot happen three times in a row. It’s not possible'.

"I think it’s the first time I had tears in my eyes after crossing a finish line, because I’m not very emotional, but this time I knew it was an important result for us."

The Hyundai could not match Kris Meeke's Citroen or Sebastien Ogier's M-Sport Ford on the opening day in Corsica, but came alive on leg two, with Neuville overhauling Ogier just as Meeke dropped out of the lead.

"This weekend I was expecting a lot because I knew on Tarmac we were fast and I had a feeling the car was fast as well from testing," said Neuville.

"But the rally didn’t start at all like we were expecting because the feeling was good, I had the feeling I was driving well and we were going fast but the times were not right. Not bad, but still not where we wanted.

"So we reacted to it because we worked a bit on the car but also the roads were different on day two which gave us the opportunity to show the full potential of the car on different kinds of roads and score the victory."

Team principal Michel Nandan nonetheless says Hyundai has work to do to match Citroen on asphalt despite taking its first win of the 2017 WRC season.

When asked to assess the i20's asphalt performance after Neuville's win, Nandan said: "I think it needs to be a little bit better, I think we are a bit behind.

"The Citroen has shown that it’s a fantastic car on Tarmac and for sure we have to work on that, especially for the next Tarmac events.

"But I’m quite sure the engineers will find a good solution to improve the car."

Nandan insisted there had been no additional nerves at Hyundai as Neuville led, despite his previous errors.

"We are always behind Thierry even after his two small mistakes in the first events. We knew that he would do it." said Nandan.

"We knew the difference in time was good enough to carry into the Sunday stages so we were not too anxious."