Ogier and Mikkelsen dice for honors in Rally Poland

The Volkswagen boys are once again on form topping leg one of Rally Poland.

Volkswagen Motorsport’s Sébastien Ogier has once again jumped into the lead on the final stage of Rally Poland today, overhauling team-mate Andreas Mikkelsen who has led for most of the day. Mads Østberg, driving the Citroën DS3 WRC, has climbed into third at the expense of team-mate Kris Meeke, who lost time running further down the order as road conditions got tricker and tricker.

The first full day of competition took in six long stages, four of which were scheduled to take place in neighbouring Lithuania, before the crews headed back to Mikołajki for the second run around the short super special stage.  The 90.06 competitive kilometres were however reduced when the repeated runs over the Lithuanian roads became too rutted and had to be cancelled. 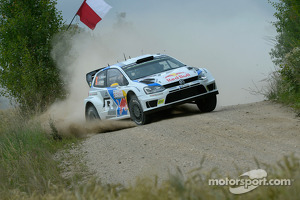 Ogier once again led the field of contenders into today’s stages but it was Mikkelsen who set the early pace, the Norwegian winning the opening test to head the leaderboard. He continued to lead after the following stage but was then overhauled by Ogier in the second Lithuanian stage. This evening, Mikkelsen again took a stage victory in SS9 but in the super special stage Ogier was 1.9 seconds faster around the 2.50 kilometre stage to take ninth-tenths of a second advantage into Saturday.

Competition has been fierce and Østberg became another stage victor in the event, benefitting by running nearer the front of the field when the conditions in stage five became very rutted. His gain was Meeke’s loss, and the Northern Irish driver dropped from third to fifth within a matter of two stages as conditions deteriorated. Jari-Matti Latvala has climbed from eighth last night to fourth, just eight seconds ahead of Meeke, and Juho Hänninen heads Hyundai’s assault in sixth. Mikko Hirvonen is seventh but all too aware that his pace notes are just too slow for this new event. Robert Kubica has had a good day after rolling yesterday and overnights in eighth. Elfyn Evans and Thierry Neuville round off the top 10.