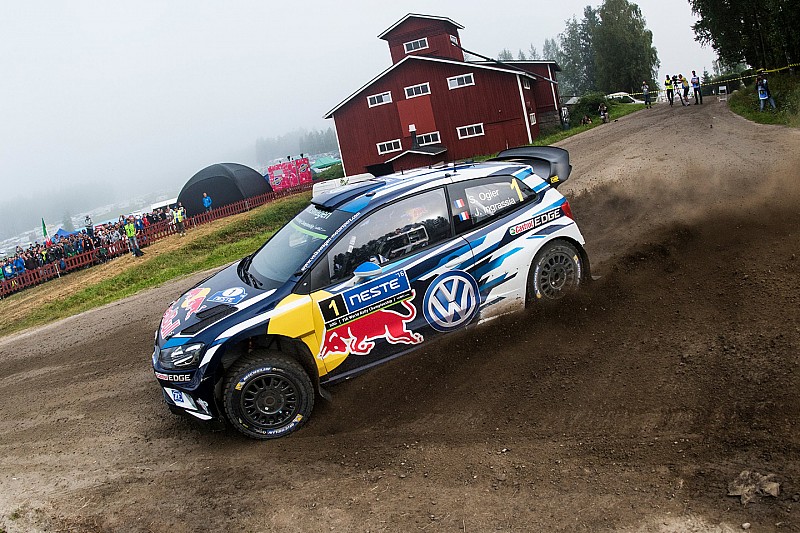 Sebastien Ogier has said he feels the WRC's current running order rules are forcing him to take too many risks, which led to the mistake that took him out of contention in last weekend's Rally Finland.

The reigning champion struggled to a 24th place finish in the Jyvaskyla-based event, losing over 16 minutes by getting his Volkswagen Polo R WRC stuck in a ditch on Friday.

Ogier has long been critical of the championship's current running order rules, which dictate that the championship leader must open the road on the first two days of each event - a major disadvantage on gravel-based events.

He said that his error was "bound to happen" as a result of having to push so hard trying to make up for having to sweep the stages.

"Overall it's a weekend to forget for us as we didn't score a single point", said Ogier, who wasn't won a WRC event since his Rally Sweden triumph in February.

"It's easy to say with hindsight, but I think we could have had third place without that mistake.

"I cut the corner more than usual on a very slow hairpin, we spun and slid into the ditch. The roadsides were very slippery and we got stuck. A stupid mistake which cost us dear.

"I think that by having to take so many risks to make up for our position as road-sweepers, this was bound to happen."

Ogier added he was looking forward to returning to competing on tarmac in the next event in Germany, with only two more pure gravel events in Australia and the UK left on the 2016 calendar.

"If we had one reason to celebrate on Sunday evening, it was the end of this series of six gravel rallies, in which we started out knowing that we didn't have the slightest chance of winning," said the Frenchman.

"Mentally speaking, it will do us good to go into the next rallies knowing that we can really fight for victory from the front."

Volkswagen would be supportive of Indian WRC round, says Capito