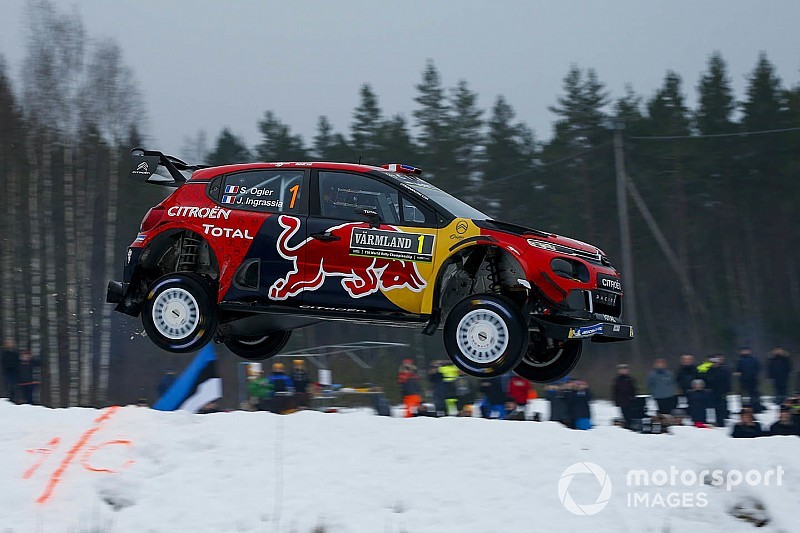 Sebastien Ogier says he can take confidence in the Citroen C3 WRC’s loose-surface ability despite his early retirement in last weekend's Rally Sweden.

The French marque has worked extensively on the C3's transmission and suspension since then, but Ogier's bid for back-to-back wins came to an end on Friday as he hit a snowbank on SS6.

He rejoined under Rally2 rules and won three stages on his way to 29th overall, and managed to salvage two bonus points for the fourth-quickest time on the Power Stage at the end of the rally.

While he was disappointed with the final result, Ogier said he was encouraged with the feeling from the C3.

“Honestly, I think the car was not too bad,” he told Motorsport.com. “The speed was pretty decent when we were first on the road. I think there is some positives in this side for us.

"It can be positive looking forward into the season. I don’t have any regrets. It’s just like it is. I will look forward and that’s what it is.

"This [rally] is not miles away from gravel [set-up], so we could work on the car and take some data. There’s still some work interesting to do in this condition.”

While Ogier came away with only two points in Sweden, Ott Tanak moved to the top of the championship standings, adding five Power Stage bonus points to the 25 he scored for winning the rally.

It means the Toyota driver has a seven-point buffer over Hyundai's Thierry Neuville, with Ogier a further nine points back in third.

On Tanak's success, Ogier said: “He did the best move, but we are only at event number two [of the season]."

Slipping to third in the championship means Ogier does not have to open the road for the next round on the calendar in Mexico, which takes place on March 7-10.