On the pace: Hirvonen takes second in Portugal

Despite falling victim to a revived Sebastien Ogier, Mikko Hirvonen looked at one behind the wheel of his Ford Fiesta RS WRC.

M-Sport World Rally Team’s Mikko Hirvonen and Jarmo Lehtinen were back on form at this weekend’s Vodafone Rally de Portugal. Fighting for the lead, the pairing finished in a strong second place – their best performance of the season to date.

Straight on the pace, Hirvonen took an early lead with an inspired tyre choice through the first full day of competition. Despite falling victim to a revived Sebastien Ogier, the Finn looked at one behind the wheel of his Ford Fiesta RS WRC. Finding himself outside of the top-three on only four of the 15 speed tests, the Finn produced a highly competitive and consistent performance. 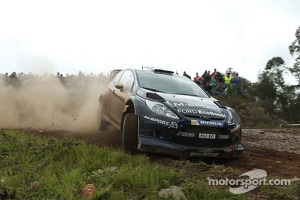 Tyre choice was a tricky call for the final day. Having selected the prime option for each of the earlier legs, Hirvonen was at a disadvantage for the final loop with just a selection of well-worn soft compounds in his arsenal. Opting for a configuration of worn-soft and fresh-hard tyres, Michelin’s resilient rubber held up to the challenge and the Finn was even able to post a second fastest time through S. Brás de Alportel (SS15).

Growing in confidence with each new kilometre, the M-Sport driver commented on how natural he felt behind the wheel of his reacquainted charge. Able to fight risk-free at the head of the field, this weekend’s result provides the perfect platform for a resurgent Hirvonen to make his mark on the championship.

Speaking of comebacks, Elfyn Evans came back fighting after a disappointing retirement on Friday’s opening leg. Rather than holding back, the Welshman was encouraged to continue the pace he was setting at the beginning of the rally. The youngster didn’t disappoint and rewarded his team of expert mechanics – who had worked throughout Friday night to provide him with a perfect Fiesta RS WRC – by posting a fourth fastest time on SS12 and continuing his development at the WRC’s highest level.

Regularly around half a second a kilometre off the pace of the leaders, Evans and co-driver Daniel Barritt are making real progress whilst displaying all the potential for future success.

Following a successful weekend for the M-Sport team with 42 Ford Fiestas appearing on the entry list – the highest number of M-Sport cars to have ever appeared at a single WRC event – the team prepares for Rally Argentina with what looks set to be one of its highest entry percentages.

The rally organisers have released a provisional entry list, and of the 22 cars entered to date, 55 per cent carry the Blue Oval. Entries for the South American fixture close this Tuesday.

Mikko Hirvonen (2nd): “I’m really happy with this result. We came here wanting a good, clean rally and that is what we have done. The car has been absolutely perfect – and really competitive – all weekend so a big thanks to the boys for the top job they’ve done.

“We knew that we had the pace, it was just a case of bringing everything together and I think that we did that this weekend. We’ll keep developing and learning, so hopefully we can fight even harder in the coming rallies.

“We’ve been another step closer this weekend, and it’s really good for the whole team. I’m sure this result will boost everyone and that we can continue to challenge at the head of the field.”

Elfyn Evans (22nd): “After the mishap on Friday, the rally has been quite good to us. I need to say a huge thanks to the mechanics who worked through the night to provide us with a perfect car from Saturday onwards. After the state we left it in, I really wasn’t expecting it to be perfect! They did a brilliant job and I hope that we’ve done them proud over the past two days.

“We had a chance to learn a lot about the car and the driving so it’s been a great learning experience and another good step forward. Obviously we have another new rally next, so we might see a slightly different approach there, but I’m pleased with the way things are going so far.”

Team Principal, Malcolm Wilson OBE: “I cannot tell you how satisfying it is to see Mikko [Hirvonen] fighting for wins again. We all knew that he had the speed and the determination to do it and to see it all coming together now is fantastic. He had the perfect strategy for the opening phases – taking an early lead – and then controlled it brilliantly to bring home a season-best second place.

“I was also very impressed with how strongly Elfyn [Evans] came back after Friday’s disappointment. He continued to run at the same pace and set some very encouraging times. He’s making some really good progress and we’ll be sure to see more from him as the season continues.”

Never giving anything less than 100 per cent as he piloted his Ford Fiesta RS WRC through Rally de Portugal’s tricky speed tests, Henning Solberg secured an impressive fifth place overall. The charismatic Norwegian set a string of highly competitive splits and was able to challenge the WRC regulars on what has been his first gravel event in a World Rally Car for more than two years.

In the WRC 2 category, M-Sport continued their dominant display with another victory. A range of M-Sport cars occupied the top eight places with Nasser Al-Attiyah’s Ford Fiesta RRC securing the win ahead of the Ford Fiesta R5s of Jari Ketomaa and Pontus Tidemand. The Ford Fiesta S2000 of Karl Kruuda finished in fourth place – proving that M-Sport’s product range remains competitive at every level.

Being run by the M-Sport team, Tidemand’s podium was a fantastic result on what is the Swede’s first outing with the Fiesta R5. The reigning FIA Junior World Rally champion put in a composed, managed and progressive drive. When his podium position came under threat, he posted the fastest time on SS15 – some 7.7 seconds quicker than anybody else – to underline his speed and potential. Continuing to develop, Tidemand’s next outing in the WRC’s premier support series will be at Rally Italia Sardegna in June.

Henning Solberg (5th): “I am very satisfied with the job we have done this weekend. This is my first time in a world rally car on gravel in more than two years and I was really very pleased with the pace we were able to set.

“I can go faster, I am sure of that. I’m an old guy, but I am very motivated. Give me a couple of days testing and I’ll be beating these young guys again, I can tell you that!”

“The car has been perfect all weekend so a big thanks to the team for that. It’s such a comfortable car to drive, and I’m really looking forward to the next events to see what we can do.”

M-Sport Managing Director, Malcolm Wilson OBE: “Henning Solberg, is there really much more that you can say? It’s always a pleasure to have Henning in the service park, and to see him performing so well here this weekend – more than two years after his last outing in a world rally car on gravel – is something very special. A very competitive performance from him and Ilka [Minor, co-driver] and if we see them back this year, I’m sure he’ll be challenging the young guys once again.

“It’s also been another very encouraging weekend for our Fiestas in the WRC 2 category with another clean-sweep of the podium. The [Ford] Fiesta RRC, R5 and S2000 were all represented in the top-four and I think that just goes to show what a competitive product range we have developed with Ford.

“I was also very impressed with Pontus’ [Tidemand] drive. This was his first outing in the Fiesta R5 and he controlled his debut brilliantly. He didn’t take any unnecessary risks and managed the entire rally with some very encouraging progress. Then, when his podium position came under threat, he posted an absolutely sensational time [on SS15]. This has been a very good event for him, and I’m really looking forward to seeing what he can do as he gets more accustomed with the car.”