Points up for grabs for the DS 3 WRCs! 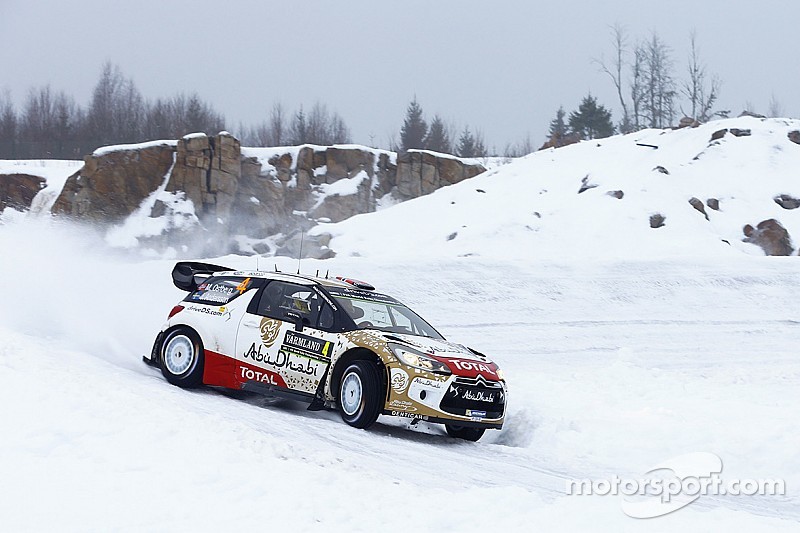 The crews were up and about before daylight this morning, heading for their DS 3 WRCs at 6.00am. After the early service, Mads Østberg and Kris Meeke covered over eighty kilometres to get to the start of the day’s opening timed stage. With temperatures just above freezing and very good visibility, conditions were perfect as they set off on Fredriksberg 1.

Firmly established in the leading quartet, Mads Østberg lost precious seconds on SS11 with a puncture on his rear left-hand tyre. Trailing the leader by over a minute at that point, he made up time throughout the rest of the leg, arriving back in Hagfors 53.4 seconds off the pace.

We won our first stage in Sweden on the snow.

Twelfth overall this morning after hitting a snow bank during the first leg, Kris Meeke started to take advantage of the experience he has acquired on the Swedish stages. After moving back into the top 10 at the end of the day’s first stage, the Briton then closed the gap on his fellow countryman, Elfyn Evans. In particular, Kris claimed his first stage win in Sweden on Rämmen 2 (SS16) as ruts appeared on the lines.

In the RC2 class, Stéphane Lefebvre moved up the standings in his DS 3 R5 to claim fourth place. In his DS 3 R3-MAX, Ole-Christian Veiby continues to lead the FIA WRC3 Championship.

There are three stages left to run tomorrow morning. The day starts at 7.40am as the crews head for Lesjöfors (15.00km) before they complete two runs on Värmullsåsen, the second of which will serve as the Power Stage and will be broadcast live on television at 12.08pm. The podium ceremony is due to begin at 3.00pm in Karlstad.

Yves Matton (Citroën Racing Team Principal): “Unfortunately, Mads lost time on the opening stage of the day. He needs to maintain a strong pace and if he gets an opportunity, he’ll also have to grab it. Kris produced some strong performances. He is continuing to learn at this level by driving on the stages. But he can’t make up the time he lost yesterday.”

Mads Østberg: “It was a tough day. Most of the stages went very well, but I had a few problems. I also made a mistake on the first stage of the day. We picked up a puncture and lost about 45 seconds. I’m disappointed but I’m going to concentrate on fourth position and enjoy the last three stages. We’ll see what happens.”

Kris Meeke: “We won our first stage in Sweden on the snow. I have to be pleased with my day, despite the frustration from yesterday. On Friday evening, we were 3 minutes 31 seconds behind the leader and now the gap is 3 minutes 22 seconds. This is only my second Rally Sweden. We have to keep up the same pace tomorrow because we’re less than a second behind Elfyn Evans and Prokop is only 19 seconds ahead. There are still places up for grabs!”