Portugal WRC: Tanak on verge of victory as Meeke spins 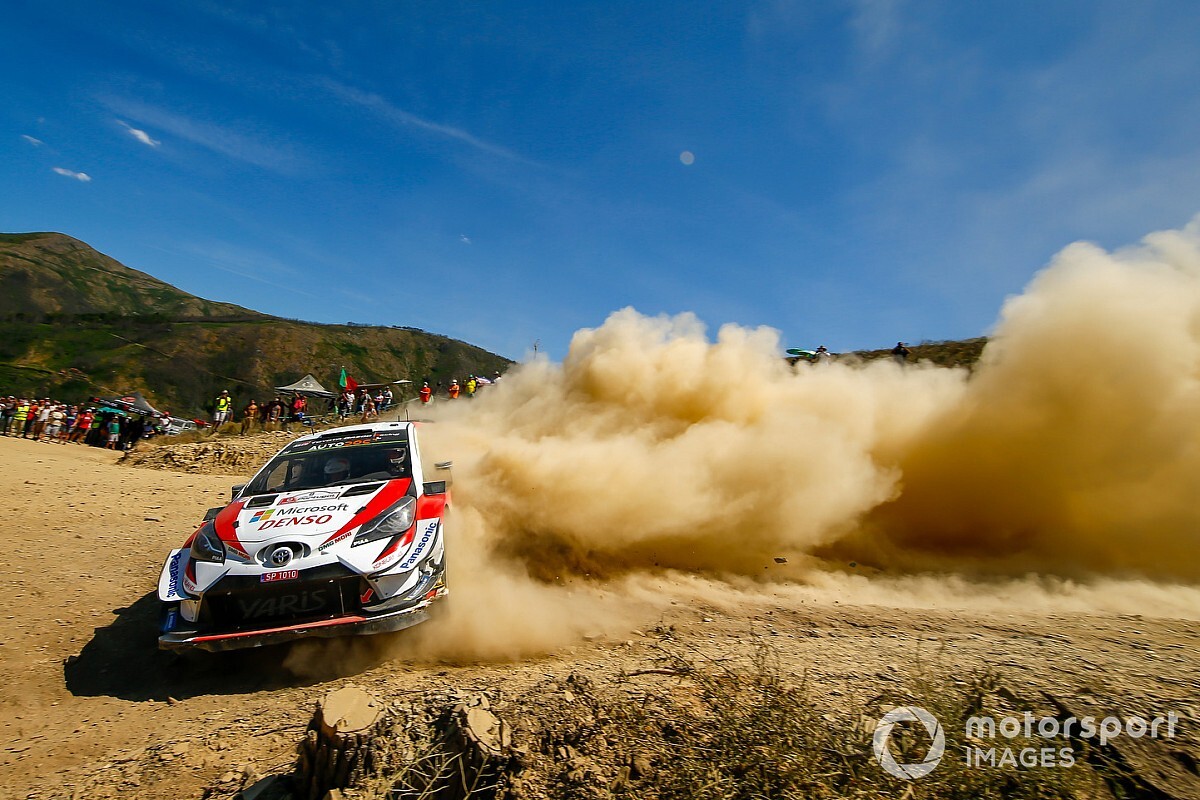 Despite starting the leg just 4.3 seconds apart, both Toyota drivers were preoccupied with keeping Hyundai’s Neuville behind them rather than fighting each other.

Meeke managed to grab two seconds from Tanak on the opening stage of the day, but Tanak responded on the following two to extend his gap over Meeke - before the Northern Irishman spun his Yaris on the second pass of Montim and dropped to third place.

Neuville had started Sunday nine seconds behind the rally lead in third but despite his best efforts, he couldn’t quite live with the pace of the leading pair. However, he is up to second place, 7.4s ahead of Meeke after the Toyota driver’s mishap.

With just the Power Stage remaining, Tanak’s lead is 16.6s over Neuville, with Meeke 24 seconds in arrears.

Defending World Rally champion Sebastien Ogier took no risks to ensure he remained in fourth place and ready to pounce on any mistakes out front. The Citroen driver is now 58.7s behind the lead, preserving his true performance and tyres for the end-of-rally Power Stage.

Teemu Suninen was resigned to his fate in his battle with Esapekka Lappi over fifth place after Lappi found some strong pace on Saturday afternoon.

However, Lappi had a ragged morning, spinning on the same hairpin as Meeke on the opening Montim stage, as he rolled his Citroen C3 twice over. Mercifully the car landed on its wheels and the Finn was able to continue, but he lost over 20 seconds.

Yet Lappi’s problems continued in the next test on Fafe, as he ran wide on a right-hander and knocked his left rear wheel into a bank. He came to the end of the stage with looked to be broken rear suspension, dropping behind Suninen by 21.7s.

Despite making some roadside repairs immediately after the stage, Lappi wouldn’t make the start of Luilhas and retired from the event as the damage to his car was too great.

M-Sport’s Elfyn Evans now finds himself in no man’s land in sixth, with sizeable gaps to Suninen ahead and WRC2 Pro leader Kalle Rovanpera behind him.

Rovanpera has a minute in hand over his eighth placed Skoda teammate Jan Kopecky, with both drivers not at their maximum as they look to consolidate their positions.

Jari-Matti Latvala started Sunday in 11th following his damper-related retirement late on Saturday, but has moved past WRC2 leader Pierre-Louis Loubet into ninth place. The Toyota driver could make more progress on the Power Stage, as he is close behind the less powerful R5 of Kopecky.

Hyundai deployed the same tactic as it did on Saturday, ordering Dani Sordo and Sebastien Loeb to check in late and run in between Ogier and Neuville in the road order.

Both drivers set some respectable stage times throughout the morning, but have nothing to fight for outside the top 15.

Gus Greensmith restarted on Sunday after his retirement on Saturday, and is just outside the top 10 places.