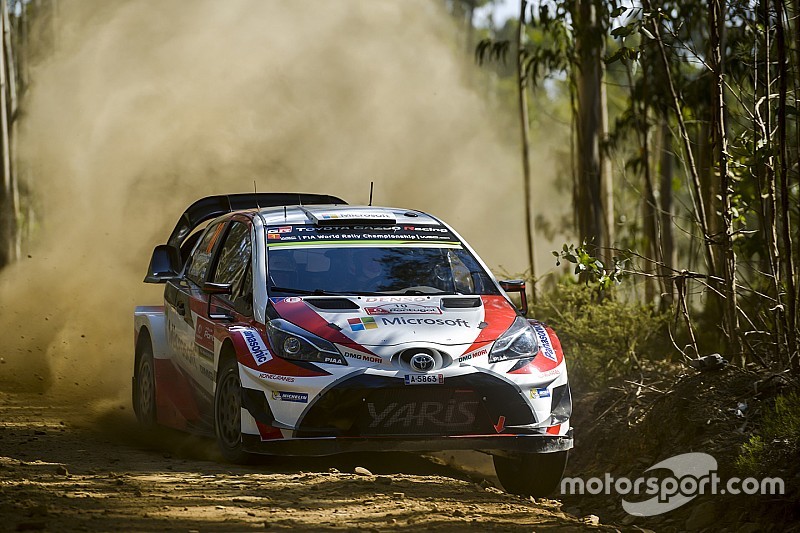 On stages where those early in the running order felt they were sweeping the dusty roads clean and those further down felt they were hampered by ruts caused by the leading cars, there has been little to choose between any of the World Rally Championship frontrunners.

Hayden Paddon and new co-driver Seb Marshall burst into an early lead on the opening Viana do Castelo stage, but then dropped to sixth when their Hyundai's engine cut out and had to be reset near the end of the Caminha stage that followed.

Latvala won that one and inched into a five-second lead, but spent Ponte de Lima unhappy with his driving and his pace notes.

Though Latvala held onto the lead, Kris Meeke, Ott Tanak and Craig Breen shared a remarkable three-way tie for the stage win there and all closed on the Toyota.

Heading to the midday break - which, in an unusual itinerary includes the recce for the evening's Braga street stage as well as service - Latvala leads by 0.5s over Meeke, 1.2s over Tanak and 1.4s over Breen.

Road-cleaning WRC leader Sebastien Ogier was as low as eighth earlier in the morning before a better time on SS4 brought him up to fifth ahead of Paddon, who as well as his car glitch also got less happy with his set-up in the changing conditions.

As the morning progressed he figured out that he needed to drop his usual smooth style and accept being "a lot more sideways" on the fast and dusty Portuguese roads.

He has clawed his way back to seventh, just 10.3s off the lead and sandwiched between Paddon and Dani Sordo in a trio of Hyundais within 0.5s of each other.

Mads Ostberg switched to DMACK tyres for his privateer Ford on the eve of the rally and admitted having not driven on them for longer than a few miles pre-event was a handicap as he struggled to predict wear rates on the longer stages.

A near-miss when he ran wide at a fast corner where Stephane Lefebvre was already recovering from a crash also cost Ostberg time and he finished the loop ninth.

Existing DMACK man Elfyn Evans was a place further back following an SS4 puncture, which he insisted was not due to hitting anything. Prior to that, he had been fifth.

Toyota's new third driver Esapekka Lappi is 12th at present, one place behind unhappy team-mate Juho Hanninen, but ended the morning angry after being held up by Lefebvre, who was dragging his Citroen through SS4 on three functioning wheels as a legacy of his SS3 roll.

Although the full 2017 WRC2 field is present for the first time this year in Portugal, none of the class regulars have an answer for World Rally Car refugee Andreas Mikkelsen.