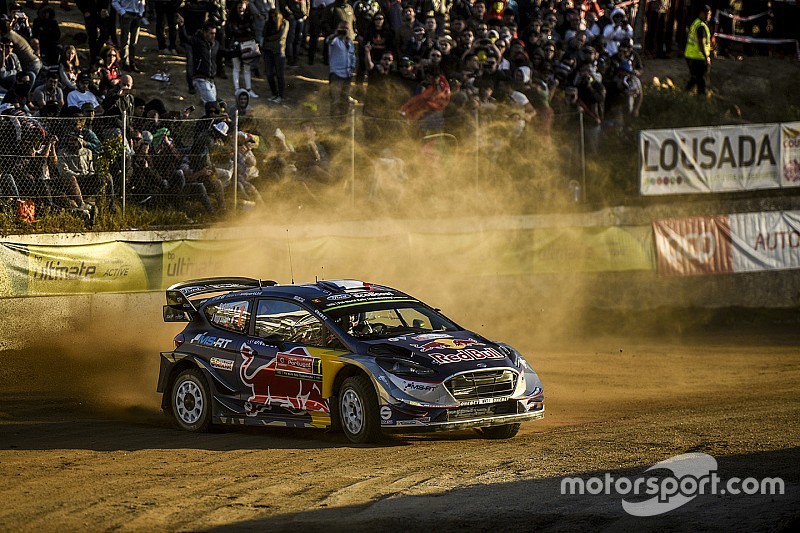 Sebastien Ogier was gifted the lead of Rally Portugal on the final stage of Saturday’s morning loop, as teammate Ott Tanak picked up left-rear suspension damage.

Ogier closed to within a second of overnight leader Tanak on the morning’s first stage, but the Frenchman had entered the loop-ending SS12 Amarante 6.3 seconds down after a stellar time from the Estonian on SS11.

Tanak had also been fastest through the opening two splits of SS12, but hit a bank before the third split and damaged his left-rear suspension.

He managed to drag his Ford Fiesta WRC to the finish, but eventually dropped 1m23.1s to Ogier, who was fastest through the stage and relinquished the lead, with Tanak dropping to fifth in the overall classification.

Monte Carlo winner Ogier therefore carries a lead of 19.5s into the afternoon loop in his Fiesta, ahead of chasing Hyundai pair Thierry Neuville and Dani Sordo.

Sordo had started the day in second, but was overhauled by Ogier on the morning’s first stage, with Neuville jumping ahead of his Spanish teammate a stage later.

The pair both lost time to the leader throughout the morning, but were the closest runners to Ogier through the final stage of the loop.

Citroen driver Craig Breen was the other man to profit from Tanak’s woes overall, the Irishman jumping up to fourth overall.

Breen was a content, if not wholly satisfied, fifth-fastest on SS12 and is 46.2s off the lead with half a minute in hand over the troubled Tanak.

Juho Hanninen is a quiet sixth in the leading Toyota Yaris, having jumped Elfyn Evans on SS1.

Evans had run fifth until that point, but picked up a puncture in his DMACK-shod Fiesta and later had to nurse a broken left-front damper through SS12 as a legacy of that problem.

Esapekka Lappi and Mads Ostberg sit eighth and ninth, while Jari-Matti Latvala clawed his way back into the top 10 in the third Yaris at the expense of former Volkswagen teammate Andreas Mikkelsen.

Mikkelsen does however continue to lead WRC2 commandingly, with more than a minute in hand over teammate Pontus Tidemand.