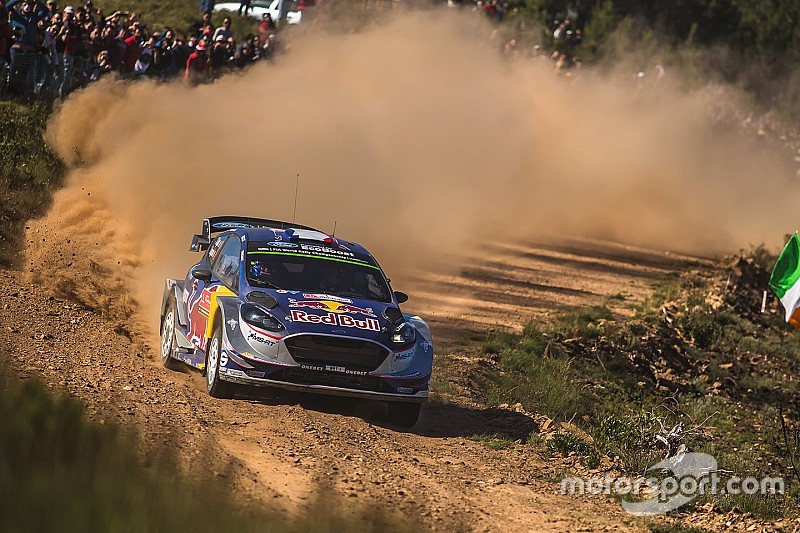 Having inherited the lead on Saturday morning’s final stage when teammate Ott Tanak made an error and damaged his left-rear suspension, Ogier entered the afternoon loop favourite to extend his advantage.

The four-time world champion forfeited a second on the afternoon’s opening loop to Neuville – who became the de facto challenger after Tanak’s time loss – but said at the end of the stage he had deliberately conserved his tyres.

That proved a sensible strategy as he duly added 4.5 seconds to his advantage at the head of the rally in his Ford Fiesta WRC to pull 23s clear.

But M-Sport man Ogier dropped time once more to Neuville on the day’s final stage, SS15 Amarante, admitting he had been too conservative as he tried to manage his tyres through the final few splits.

That means the pair will enter Sunday’s final day of competition with Ogier 16.8s to the good over the i20 of Neuville.

Dani Sordo holds a lonely but comfortable third in the second Hyundai i20, having drifted further away from the lead two after initially dropping time in the morning.

The Spaniard came through the finish at the end of SS15 with damage to the rear-left of his car, but completed the day with more than half a minute in hand over the fourth-place car of Tanak.

Estonian Tanak had started the loop in fifth as a result of his SS12 accident, but with his Fiesta repaired during service he enjoyed a clean afternoon – albeit without the same speed he had produced earlier in the day – to gain one spot overall.

That came at the expense of Citroen’s Craig Breen. The Irishman had started the loop confident that his tyre choice would serve him well, but later said there had been a “misunderstanding” in the service park as he ended the loop a minute and a half down on the leader.

Elfyn Evans had a largely anonymous afternoon but did move into sixth on the final stage at the expense of Toyota’s Esapekka Lappi, who hit a wall on SS15 and dropped more than five minutes as a result.

Andreas Mikkelsen had maintained his stranglehold on WRC2 proceedings before closest rivals Pontus Tidemand and Teemu Suninen hit trouble on SS15, and now holds a 3m07.1s lead over teammate Tidemand in class.