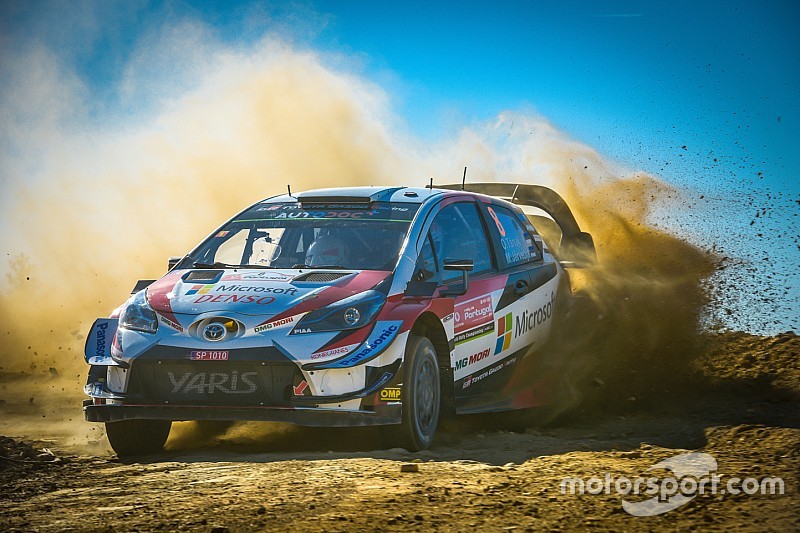 Latvala reduced Tanak’s advantage from 6.9 seconds to 5.4s on the first stage of the afternoon, but immediately fell back again on stage five as he “tried to save his tyres” for stage six Arganil.

Ultimately Latvala’s couldn’t take advantage as he stalled the engine on stage, dropping to 15.2s behind Tanak ahead of tonight’s superspecial stage.

Suninen was set to overhaul Latvala after taking third from Meeke with a second-fastest time in Lousa and then fastest in Gois. However his Fiesta “lost all brakes” on stage six, plummeting him down to sixth and elevating Meeke back into third.

World champion Sebastien Ogier sought to recover some of the damage done in the morning when he was forced to sweep the loose gravel from the surface of the stages.

His pace was more encouraging relative to Tanak, losing just 2.9s across the loop, but he was overhauled by Thierry Neuville on stage four who was on his own recovery mission following a stall in the morning.

Ogier responded on the following test to retake what would become fourth from Neuville, but it was the Hyundai driver that ended the loop ahead, just 0.7s in front and crucially behind in tomorrow’s start order.

M-Sport’s Elfyn Evans had been running ahead of the pair but drama was to befall him on SS5 as he pulled up with a suspected throttle pedal issue.

After finding a loose connection and reconnecting it, he managed to restart but would drop four minutes by the end of the stage. He completed the afternoon loop but outside the top 10.

Ogier’s Citroen teammate Esapekka Lappi was slowed by the hanging dust left behind Evans’ Fiesta, thus losing 56 seconds - but the Finn is expected to get that time back. Otherwise he completed a clean loop of stages to hold eighth.

Gus Greensmith lies a place ahead of Lappi in seventh on his WRC debut for M-Sport.

Hyundai pair Sebastien Loeb and Dani Sordo remain well outside the top 10, beginning the afternoon 15 and 18 minutes off the lead respectively after both suffered a fuel related issue in the morning.

Sordo topped SS4 but suffered another setback in the form of a front-left puncture on stage five.

Leading WRC2 drivers Ole Christian Veiby and Jan Kopecky round out the top 10.